Partick Thistle had taken the lead from Conor Sammon’s penalty 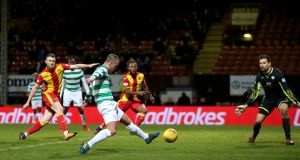 Leigh Griffiths came off the bench to spark Celtic into life as they came back from a goal down to beat Partick Thistle 2-1 in the Scottish Premiership.

Irish striker Conor Sammon, on loan from Hearts, gave the home side the lead from the spot in the 34th minute after defender Mikael Lustig had conceded the penalty.

Griffiths, fit again after an ankle knock, replaced the Swede for the start of the second half and made all the difference.

Winger Scott Sinclair won and converted a penalty 10 minutes after the break before Griffiths scored the winner from close range in the 70th minute to take Brendan Rodgers’s side 11 points clear of Aberdeen at the top of the table.

There was no prospect of a Celtic slip-up before the game.

Rodgers kept the same side from the weekend’s 5-0 Scottish Cup win over Brechin City with returning Griffiths joining French striker Moussa Dembele, whom Rodgers admitted had been affected by speculation regarding his future, on the bench.

Baily Cargill, 22, who completed a loan move from Bournemouth until the end of the season, made his debut in the Thistle defence with right back Mustapha Dumbuya starting his first competitive game for the Jags since April after recovering from a knee injury.

It was a far from blistering start from the league leaders although striker Odsonne Edouard tested Jags goalkeeper Tomas Cerny with a low drive in the fourth minute.

A 25-yard snap-shot from midfielder Olivier Ntcham in the 19th minute escaped Cerny’s right-hand post by a matter of inches before Celtic goalkeeper Craig Gordon stretched to tip a curler from Thistle wide-man Miles Storey over the bar for a corner which came to nothing.

There was still a sense of shock when the Maryhill men took the lead.

Lustig made a mess of an attempted clearance and when Storey went past him and into the box he was impeded by the full back, according to referee John Beaton who pointed to the spot, and Sammon sent Gordon the wrong way with his spot-kick for his fourth goal in three games.

Griffiths’s introduction brought an immediate increase in tempo with Cerny making another save from Edouard and then from Griffiths after the Scotland striker raced through on goal.

The leveller was coming and it arrived when Dumbuya felled Sinclair inside the box for a much more obvious Celtic penalty award by Beaton and the winger picked himself up and slotted in the spot-kick.

The Parkhead men swarmed around the Partick box and Cerny pushed a powerful Kieran Tierney drive round the post with the Jags surviving the corner.

However, their luck held out only until Griffiths took a Scott Brown pass and dismissed Jags substitute Adam Barton, before poking the ball past the Thistle keeper and over the line.

The Hoops moved into top gear and only a fine recovery tackle by Cargill denied Griffiths a clean shot on goal after he had breached the Thistle rearguard again with Celtic, after their first-half wobble, seeing out the rest of the game with some authority.

1 Saudi Arabia-funded takeover of Newcastle United in serious doubt
2 Decision expected next week on staging of College Football game in August
3 Coming fourth in the Olympics didn’t change this fearless quartet, time did
4 Gerry Thornley: Home and away Six Nations could be its ruination
5 Sideline Cut: Vignette shows why Bird is the true shark in The Last Dance
Real news has value SUBSCRIBE
Crossword Get access to over 6,000 interactive crosswords