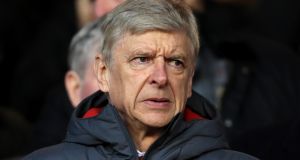 Arsene Wenger: “You celebrate some teams who have not been in a final for 25 years and yet you kill us, even though we have won the FA Cup three times in the last four years.” Photograph: Mike Egerton/PA

Since Alexis Sánchez’s transfer to Manchester United was confirmed on Monday evening there has not been a single tweet from one of his former Arsenal team-mates to wish him well or say what a pleasure it was to play alongside him. These guys and this club are not noted for their reticence on the social media platform. Sometimes, it is what is left unsaid that makes the point.

Arsène Wenger went the other way.

The manager had something to get off his chest yesterday morning and he dived right in. Arsenal are one game from the League Cup final – they entertain Chelsea at the Emirates in the semi-final, second-leg, with the scoreline at 0-0 from the first leg – and Wenger was asked whether victory and a Wembley appearance would lift the mood at the club.

“To change the mood?” Wenger said. ‘I have no illusions at all. The mood is decided by you [the press]. Look, we have been in a few finals. Has it changed your mood? No. You celebrate some teams who have not been in a final for 25 years and yet you kill us, even though we have won the FA Cup three times in the last four years. It’s like that. We have to live with that.”

Tottenham Hotspur’s last appearance in an FA Cup final was 1991 and there is the sense in some quarters at Arsenal that the British press have anointed them as their darlings – despite their lack of silverware. Similarly, they feel that Liverpool, who have struggled for trophies in the past decade or so, have been feted more than criticised.

It is into this climate that Arsenal welcome Henrikh Mkhitaryan – one characterised by the mentality of the siege and where meltdowns bubble around every corner.

Mkhitaryan, who joined from United in a straight swap for Sánchez, is cup-tied against Chelsea and must wait until next Tuesday to make his Arsenal debut – at Swansea City in the Premier League. The pressure will be on him to provide positivity from the off.

Mkhitaryan struggled under José Mourinho at Old Trafford and Wenger admitted that the challenge for him would be to put the psychological scars behind him – in the same way that Liverpool’s Mohamed Salah and Manchester City’s Kevin De Bruyne have done. Both of them struggled under Mourinho at Chelsea.

“You worry about how much it has affected him but it’s a new chance and that’s what you want in life,” Wenger said.

Wenger raised the prospect of him filling the midfield boots of the long-term injury victim, Santi Cazorla.

“I see him first wide but I’m thinking as well that there is the possibility for him to play through the middle.”