Clubs recognised for their work with refugees and asylum seekers 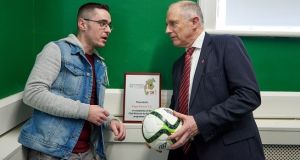 Sligo Rovers was one of five sports clubs to be recognised at an event in Dublin on Tuesday for its work over the past year on the Club Welcome project, an initiative that aimed to helped get more refugees and asylum seekers involved in grassroots sport around Ireland.

Rovers were one of five clubs to work with the charity Show Racism the Red Card (SRTRC) on the scheme. The other clubs to be recognised were Booth Road Celtic from Clondalkin in Dublin, Emo Celtic from Laois, Ballinacurra Gaels in Limerick and Ballaghaderreen GAA club in Roscommon.

Minister of State for Equality, Immigration and Integration, David Stanton emphasised the central role that sport can play in bringing new arrivals into their local community as he presented representatives of each of the five clubs with plaques to mark their participation in the programme.

“Our country has changed and changed so much for the better,” said Stanton, who noted that the most recent census had shown that just under 12 per cent of the population now had a nationality other than Irish.

“All over Ireland today, in our towns and our rural areas, we have diverse communities and that bring colour and vitality to our communities,” he said. “We have a responsibility that people are made and feel welcome. Programmes like this are always welcome because of some of the people they are aimed at have come through some very difficult situations and travelled great distances to be here.”

Garrett Mullan, of SRTRC, cited examples of the work done by Ballaghaderreen GAA club, where a number of Syrian refugees now train regularly with the under-18 team and Emo Celtic in Laois, who have free memberships to children of asylum seekers and made all-weather facilities available as examples of the way the scheme had worked so successfully.

“It’s worked out really, really well,” agreed Shane Crossan, marketing and PR officer at Sligo Rovers. “It’s work that, in the north west, we had never really done but we were delighted to do it and I’m delighted to say it was a terrific success.

“Initially there were some problems, a lot of meetings and phone calls and all of that but I mean it was really, really well worth it in the end. The first thing was to build a relationship with Globe House in Sligo and it was a challenge at the start to build trust with the residents there.

“It came as a bit of a shock to us that they didn’t really know about Sligo Rovers; they didn’t know where the stadium was, didn’t know the facilities that we had on offer but the project changed that. We have 25 adults coming to our stadium every week playing football with fully qualified coaches. Some of our underage coaches came in to coach them.

“But it wasn’t just about people coming in and playing football for an hour a week then going home. It has grown way beyond that and the hope is that some of the people are going to get involved in voluntary work with the club over the coming season.”

Rovers are keen to continue their involvement with the scheme which was originally supported by the Community Foundation and The Ireland Fund but is now expanding thanks to backing from the St Stephen’s Green Trust. Details are available at theredcard.ie.

“We’d have no hesitation whatsoever about wanting to be involved in year two of this project,” said Crossan. “I can’t speak highly enough of Garrett and the project itself.”