Ireland striker out for eight weeks after undergoing keyhole surgery 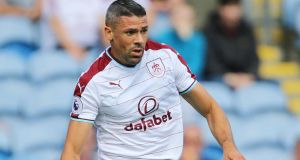 Sunderland are reported to have ended their interest in Republic of Ireland striker Jon Walters after the Burnley player underwent keyhole surgery on Wednesday to address a cartilage problem.

The 34 year-old has been struggling for game time at Burnley since moving to the club last summer from Stoke City but after four months on the sidelines he make a couple of appearances in recent weeks, coming on in the league game against Manchester United and the cup defeat by Manchester City.

Devastated..but it is what it is! I don’t look too bad in tights!! pic.twitter.com/x7sdXA6fF0

In a series of tweets from the hospital where he was about to undergo the operation, though, he suggested that the latest injury will keep him out for eight weeks, a setback that has apparently prompted Chris Coleman to look elsewhere.

“He went to see a specialist with a tiny split in his cartilage,” said Burnley boss, Sean Dyche. “It’s not even a tear, it’s not serious, but has to be taken care of. They thought it best to keyhole it and deal with it.

“It’s the same knee he’s been building up, and it’s unfortunate for him and us, especially with the amount of injuries we’ve picked up.”