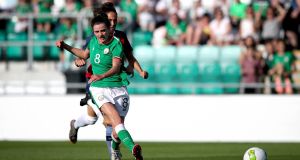 Ireland’s 19-year-old international Leanne Kiernan has completed a move from Shelbourne to West Ham United after impressing on the domestic and international stages in recent years.

Kiernan – who made her senior international debut two years ago and shot to fame when she scored a hat-trick for Shels in the women’s FAI Cup final in 2016 – has been training with her new team for two weeks and has now signed her first professional contract.

The Cavan native has spoken before about her love for home, and particularly the pigs on the farm where she grew up, but London is now the destination for her with the 2018/19 Women’s Super League season on the horizon.

“I’m delighted to be joining West Ham, as it’s the next step in a brilliant adventure for me,” Kiernan told the club’s website.

“It’s a big step over the water, but the girls are lovely and I’m really enjoying it. It’s a great club to join. There is so much ambition to this club and I’m really looking forward to seeing how this season goes.

“It makes it a bit easier that everybody is in the same boat as me as we’re new to West Ham. Everybody is friendly and it feels like home.

“ We only arrived a few weeks ago, but it already feels like we’ve been friends for years as we all get on very well.”

“I’m looking forward to giving it a go and seeing how I get on. Hopefully it’ll go well. Anybody coming here wants to be in the starting eleven, so I’ll work hard, get my head down and hopefully get a place.

“We want to get our names out there as West Ham this season and show we’re not just in the league to take part. We want to make our mark.

“I’m used to being at home on the farm, but now I’m living in a big city like London.

“It’s been good so far. I’m living with two of the girls and learning all the new things I need to do now I’m living away from home for the first time.

“Every summer, my job used to be at home looking after the pigs, but now things are very different!”

1 Tiger shines and Brady bites back as charity match proves an enjoyable release
2 The Offload: Philip Browne’s grave outlook should be taken seriously
3 Ken Early: Liverpool fans, Bamber Gascoigne and a close shave in Istanbul
4 Coronavirus: Leinster cancel sale of season tickets for 2020-21
5 Sideline Cut: Vignette shows why Bird is the true shark in The Last Dance
Real news has value SUBSCRIBE
Crossword Get access to over 6,000 interactive crosswords