Ordinary Russians will foot the bill for years to come, in a tournament where resources told 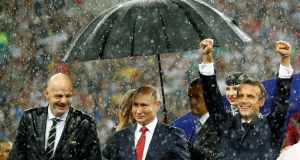 The presence of a shiny freestanding ad for the Qatar World Cup in the grounds of Moscow’s Victory (or second World War) museum was a reminder that you can buy things in Russia now that might not have been for sale before. It also brought back to mind the close co-operation between the two countries that delivered their rights to host the tournament this year and in 2022 after a deeply flawed selection process.

As we reflect on what was a better than expected event in Russia, it is worth noting that the quality of the football, or even the venues, does not change the fact that Vladimir Putin’s country would probably not have got the event had the voting been based on the merits of the various bids.

And it has not changed any of the foreign or domestic policy issues that caused so many to have deep reservations about the staging of the competition there. Russia is still militarily supporting a despot in Syria, and since the World Cup kicked off, some three million of its own citizens have signed an online petition opposing changes to the nation’s retirement age, which will raise it beyond the life expectancy of many.

So, despite the fawning of Fifa president Gianni Infantino, it would be nice if this World Cup was remembered a success for the people of Russia who did so much over the past few weeks to address the misguided image the outside world had of them rather than for the country’s president, who has done nothing much at all to address the image the rest of us have of him.

Putin wrote the cheques required, more than €10 billion worth of them, it is estimated, but the pension reforms are a reminder of who is really footing the bill. The country now faces the challenge of justifying on an ongoing basis such huge expenditure, especially on the stadiums themselves, with some shaping up to be white elephants on a par with quite a few of the ones constructed in South Africa and Brazil. Fifa will not give the matter a second thought as it packs up and moves on, that much is certain.

The hope is, meanwhile, that having attracted some 700,000 foreign visitors for the World Cup (Moscow’s numbers were up 60 per cent while for some of the other host cities there would scarcely be a base figure to work with), Russia can grow the underlying number of international tourists who visit by 15 per cent next year on the back of all the positive publicity it has received; a first step in building a genuine and meaningful legacy.

As for the football, there were great games and a lot of excitement but not perhaps the sustained quality that we have seen at a few earlier editions of the competition.

Losing Germany in the group stages, then Argentina, Spain and Brazil early in the knockout rounds took a toll on closing stages, if only because of the greater sense of occasion that generally accompanies an encounter between the traditionally great powers.

Of course, it opened up the opportunity to Croatia to make the final and the result was highly entertaining, but it might have been a very different game had one of the major powers faced France on Sunday and played well on the day. Didier Deschamps' side would, at least, have probably had to hit something approaching their best over the course of the 90 minutes to be sure of their title. Clearly, there are a lot of “ifs” in all of that.

As it is, the style of the champions has been much analysed and fairly widely criticised. It has not, even the coach accepted, always been the “most beautiful”, and yet he will clearly feel vindicated by their success. Deschamps coached the side in 2014, when they were a little more expansive when taking on Germany, enjoying an even share of the possession but losing 1-0, and two years ago when they had more of the ball in the final against Portugal but went down again.

As he approached his third tournament in charge, it seems hard to begrudge him the fact that he sought to settle on a genuinely winning formula. There may have been some brutal calculations involved, but the defeats of Argentina and Croatia were still genuinely very entertaining affairs. Against Belgium, France were really compelling and at their most efficient against the only team in the tournament that outscored them overall.

Whatever about the debate, France, the best team in the tournament, were worthy winners.

It will be interesting to see what Deschamps does now that the group has won a world title; whether the confidence it brings will generate more ambition in terms of the team’s tactical approach. It would be nice to think that such a talented group would be encouraged to play to their creative potential, because there will always be enough inferior sides whose hopes are distilled down to working hard to keep it tight and grabbing something.

The other worrying trend in Russia, though, was the continued dominance of the World Cup’s final stages by European sides.

From the time Uruguay won the title in 1950 until Brazil won it in 2002, just four of 14 deciders had been between two European nations and it had not happened at two tournaments in a row. Since 2002 all four titles have been won by European sides and only Germany in Brazil had to beat South American opponents (Argentina) to clinch the crown.

Last week, as in 2006, all four of the semi-finalists were from Europe.

There must be a worry that the resources within the club game in this part of the world are contributing to the sustained superiority of those countries with the wealthiest leagues. Okay, Croatia do not really fit the theory especially well, but England would have had they beaten them in their semi-final, and there are certainly huge concerns in Argentina, for instance, over its ability to develop young talent given the relative lack of resources.

That, over time, could seriously devalue the World Cup. The much more immediate concern is that, after Fifa effectively getting away with it here, Qatar will not exceed expectations in anything like the way Russia did.