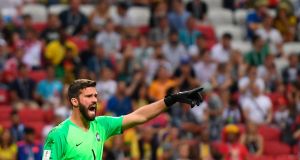 Brazil goalkeeper Alisson is on his way to Anfield. Photograph: Manan Vatsyayana/Getty Images

Liverpool have signed the goalkeeper Alisson for a world-record fee of €75m (£66.9m), subject to a medical. The goalkeeper is flying to England on Wednesday night and is expected to have his medical on Saturday.

The Premier League club made an initial €70m bid for the Brazilian on Tuesday, which was rejected, but the clubs have now reached a deal. Liverpool and Roma agreed the final details of the transfer on Wednesday with the fee, which include add-ons, to be paid over two years.

Chelsea were ready to move for Alisson if Thibaut Courtois departed but Liverpool have acted swiftly in an to secure their No 1 goalkeeper target. Chelsea had, by Wednesday lunch time, not made an offer. Alisson spoke to the Liverpool manager, Jürgen Klopp, on Tuesday and had his heart set on a move to the Champions League finalists.

The Brazil international will replace Loris Karius as Klopp’s No 1. The goalkeeping position has been problematic at the club for several years and neither Karius nor Simon Mignolet has convinced the German manager they are a long-term solution.

Alisson joined Roma from Internacional in 2016 for €7.5m. He spent the first season as Wojciech Szczesny’s back-up and did not play a league game. Last season, after the Pole left for Juventus, Alisson became first choice and helped Roma reach the Champions League semi-finals, where they were eliminated by Liverpool.

Alisson is Liverpool’s fourth summer signing after the arrivals of Naby Keïta from RB Leipzig (£52.8m), Fabinho from Monaco (£40m) and Xherdan Shaqiri from Stoke City (£13.5m). The fee for Alisson is a record for a goalkeeper, eclipsing the €53m paid by Juventus for Gianluigi Buffon in 2001 and the €40m it cost Manchester City to buy Ederson from Benfica last summer. – Guardian service