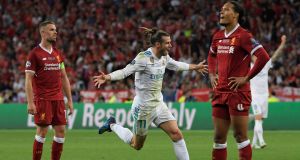 Gareth Bale is set to be handed the challenge of replacing Cristiano Ronaldo as Real Madrid’s driving force when he meets his new coach, Julen Lopetegui, for talks in the next two weeks.

The move will disappoint José Mourinho as Bale is a long-term target of the Manchester United manager. Mourinho is leading the club’s pre-season tour of the US, the squad having flown to Los Angeles on Sunday.

Bale is yet to discuss his future with Lopetegui, having been on holiday before Real’s pre-season training started on Monday. The 29-year-old will seek assurances that he will become a starter again, having spent much of last season on the bench under Zinedine Zidane.

This led to the Welshman suggesting he might leave the club following a match-winning substitute appearance in the Champions League final win against Liverpool in May. It is understood, though, that Bale believes he will be told Lopetegui views him as the successor to Ronaldo, who was sold to Juventus for €100m (£88.3m) this month. If so, Bale will remain at a club he joined in summer 2013 for a then world record fee of £85.3m.

Bale entered the Champions League final on 61 minutes with the score at 1-1. Within three minutes he scored the first of two decisive goals, a spectacular overhead kick. Yet after the match he voiced frustration at not starting, alerting United and other suitors to his potential availability.

Alexis Sánchez was not in the United squad that flew to LA, with confusion surrounding his absence. The forward was pictured in training on Wednesday at United’s Carrington base in an Instagram post by Ander Herrera and as Chile did not participate in the World Cup Sánchez was expected to be in Mourinho’s party.

Daley Blind also did not fly with United, though this is because of his expected move to Ajax. United being their five-match tour against Club América in Phoenix on Thursday.

1 Andrew Porter: Chasing Cheika will keep me on my toes as ‘holidays’ arrive
2 Bernard Jackman helping world’s top coaches pick each other’s brains
3 Joshua Kimmich: ‘we have to wear masks and take showers at home’
4 GAA expected to accelerate return to play programme on Friday
5 How a GAA club sprang up in east Belfast over Sunday breakfast
Real news has value SUBSCRIBE
Crossword Get access to over 6,000 interactive crosswords