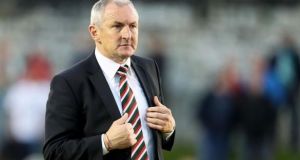 A clean sheet was well on course for City in last week’s first leg until Michal Kucharczyk’s late shot from distance beat stand-in goalkeeper Peter Cherrie to give the Polish treble-holders a vital first-leg advantage.

Even with Legia bolstered by the return of mainstays Artur Jedrzejczyk and Michal Pazdan from World Cup duty with Poland, Caulfield is contemplating an upset at the Polish Army Stadium. He’s not prepared to countenance the notion of the fall-back prize of entering the Europa League at the third-round stage.

“That hasn’t been mentioned once within the group,” asserted the manager, whose club are guaranteed to receive a minimum of €820,00 for their European exploits.

“Firstly, we’ll have to defend for our lives because Legia will dominate the ball on their home pitch. Having been unable to make our chances count in the first leg, we’ll need to remain compact and play on the counter-attack.

“Nobody is under illusions that we’re not massive underdogs here but we can take some inspiration from the fact that both Dundalk and St Patrick’s Athletic scored when they came here in European competition over recent years.”

All of the pressure is on Caulfield’s opposite number, Dean Klafuric, to make the second leg a formality and so set up a second-round tie against the victor from the tie between FC Spartak Trnava and HSK Zrinjski.

Caulfield, meanwhile, has called on everybody in Irish football to raise standards amid the latest problems at Bray Wanderers and Limerick FC.

Cork came out of financial issues which started a decade ago to become champions but the Cork boss feels history is repeating itself.

“Poland is a top sport, a serious industry where the players at this club are worth millions of pounds,” he said.

“In our league, we’re trying to do things properly but we’ve had problems during the 40 years I’ve been involved. For Bray players to be left without wages is very disappointing. At some point, you have to be serious and tackle it.”

After the FAI’s deadline for Bray to pay outstanding wages of 5pm came and went yesterday, the association vowed to impose sanctions of imposing transfer bans and banning the club from the Scottish Challenge Cup.

Still, their representatives in the Players’ Football Association of Ireland (PFAI) will not just be content with the salaries, which were due on May 25th, being discharged.

“The players will play against Bohemians this weekend and then they we will look at strike action for the Cork City game at home,” said Stephen McGuiness, secretary of the PFAI.

“Players have to be paid the wages owed and security of the wages given for the rest of the season.”