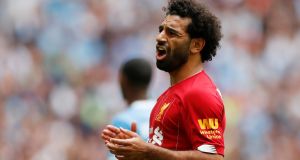 It is the Community Shield. Both sides were very obviously rusty. Both sides were slack in ways one would not expect them to be. Even the spray of shiny streamers to greet the winners felt understated, a little half-hearted.

It is probably unwise to draw too many conclusions from a sultry August afternoon at Wembley but, if there is a lesson to be drawn, it is that last season may not be a blip, that there really may not be much between Manchester City and Liverpool.

This has the potential to be one of the great rivalries, what Sunderland v Aston Villa was in the 1890s or Liverpool v Leeds in the late 1960s and early 70s or what Manchester United v Arsenal was around the turn of the millennium.

These are two excellent sides – even if there was much that was not excellent here – and the jostling for honours is beginning to build an antipathy. There was even a brief spark in the build up of the sort of mind games that were almost entirely absent last season as Jürgen Klopp chuntered about City’s spending.

But if that rivalry is properly to develop, there is a need for Liverpool to win, to beat City either to the title or in a major final. Or even a minor final – or whatever the Community Shield is.

In truth, other than bolstering Pep Guardiola’s trophy count City’s penalty shoot-out victory does not much matter. Far more significant is that this was a relatively even game, one in fact that Liverpool will feel they might have won in the second half. And that is good news for the Premier League and English football more generally because the alternative, frankly, is a troubling prospect.

There is evidence that a dominant figure in individual sports is attractive, that Tiger Woods added millions to the viewership of golf tournaments even in his days of overwhelming superiority, long before his fall and redemption. The evidence for team sports is less clear.

Perhaps there is a constituency that simply wants to watch a team playing football extremely well, that does not care too much about the opposition and places no great value on how hard earned that virtuosity is. It is the logic that continues to sustain the Harlem Globetrotters.

That, though, is entertainment while sport, as countless fans of Football League clubs were reminded on Saturday, is very often not entertainment. Struggle is integral to sport: excellence must be earned.

And the problem for City is that they are so good – thanks to the intensity and brilliance of their manager, to a talented and well balanced squad assembled with extraordinary efficiency and, yes, to the vast resources of a foreign government with a dubious human rights record – that there have been times when it did not feel as though they were having to try especially hard, that the machine was so well conceived and constructed that it just bore down inevitably to victory, crushing all before it.

There is something paradoxical in this, of course. Sheikh Mansour’s investment in the club in 2008 was an exercise in sportswashing, in familiarising a global audience with Abu Dhabi and making at least a proportion of them feel benignly disposed towards the emirate.

But the better City have got, the more likely the prospect of a lengthy hegemony, the more troubling their ownership has come to seem. That came to a head in the FA Cup final and City’s 6-0 victory against Watford. For a mid-table side who had had a decent season to be so comprehensively outplayed felt a desecration of one of football’s showpieces.

There was a spell, just after Raheem Sterling had given City the lead following the sort of defending that had characterised Liverpool in the pre-Virgil van Dijk days of the season before last, when it seemed Guardiola’s side might be on course for another straightforward victory, one that might have suggested a gulf between the sides, the sort of superiority that might have dampened the belief of Klopp’s side before the real business had even begun.

Liverpool, though, responded, found an equaliser and had the chances to have won, hitting the woodwork twice while Mohamed Salah squandered eight chances – a remarkable statistic given City on average ceded only 6.3 chances per game in the Premier League last season.

City, equally, had the chances to win the match without recourse to a shoot-out but Sterling was demonstrating the sort of indecision that so often seems to afflict him when playing for England.

Both sides, without question, will improve. Neither, surely, will be quite as open as this when the season begins for real. The sense of undercookedness about both sides will yield soon enough to fatigue.

But the early sense, particularly if, as Klopp suggested, Liverpool were slightly less prepared than City, is that the champions will again have a proper race to run if they are to regain their title. – Guardian