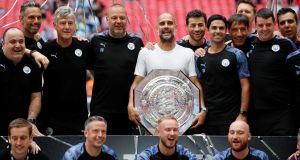 Manchester City manager Pep Guardiola celebrates with coaching staff as they pose with the trophy after winning the FA Community Shield at Wembley: Photograph: David Klein/Reuters

Pep Guardiola said he expects Manchester United to be serious challengers for this season’s Premier League title once they complete the signing of Harry Maguire.

Guardiola was speaking after seeing his side edge Liverpool in the Community Shield on penalties after a 1-1 draw.

It was an intense clash between the teams who vied for the title last season but Guardiola said he can see other sides, particularly United, joining the fight this term after they outbid City for the centre-back and are set to sign him from Leicester for €93m, a world-record fee for a defender.

“Maguire is an excellent, top-class player,” Guardiola said. “We were interested but we could not afford him. United could afford him. He’s strong in the air, good with the ball, he can drive with the ball and he’s so fast. He has a lot of qualities, so congratulations to United.”

The City manager suggested that with United’s defence bolstered by Maguire and the €54m right-back Aaron Wan-Bissaka, City have a real fight on their hands as they aim for a third consecutive title.

“People say we are going to win [the title] again but I don’t care,” Guardiola said. “I don’t know if it will be like last season with only two challengers, I think there will be many more. There are five or six teams who are contenders, then after the competition will talk. For United, it doesn’t matter what has happened in the last four or five years, they always start as contenders. They will go higher with the players they have bought. And Arsenal, Chelsea and Tottenham [will also challenge].”

Guardiola has no doubt Liverpool again pose a big threat to his team.

“You have to give a lot of credit for this victory,” he said. “Liverpool are the champions of Europe and a top class team. The difference [last season] was one point ahead, now it’s one penalty ahead. That is the difference.”

Describing the game as “tremendously demanding”, Guardiola admitted: “Liverpool were better than us in the last 20 minutes but we scored one penalty more.”

Confusion surrounded the absence of Riyad Mahrez from the City squad, with Guardiola suggesting the winger, who won the Africa Cup of Nations with Algeria on July 18th, initially declared himself available but was left out after a minor illness before returning to England on Friday.

“We don’t know what he took for medicine and that is why for doping control there was a risk,” Guardiola said.

Jürgen Klopp said he was happy with the way his team recovered from a sluggish start.

His side had won only two of their seven previous warm-up matches, but Klopp was pleased with their last game before Friday’s Premier League opener, at home against Norwich.

“We had a difficult pre-season [before this] but the boys did what they had to do. It was a very important game and gave us and our supporters a good sign.”