Ken Early: England’s attempts to play like City are doomed

Leave the high-end stuff to the Champions League. At international level, basic is best 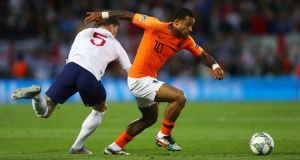 Uefa abandoned the third-place play-off match at the European Championships after the 1980 edition of the tournament. Why they have decided to reintroduce the concept for the Nations League is difficult to say. Maybe they thought the third-place game was a necessary deterrent to prevent disinterested teams sacking off their semi-finals and escaping to the beach.

In the event the semi-finals turned out to be good competitive games, but the third-place game, as always, felt like being kept back for detention on the last day of school. When the video referee cancelled Callum Wilson’s 85th-minute goal for England and condemned us to half an hour of extra time, the England fans chanted “f*** VAR” and for once they spoke for the whole world.

There was some Irish interest in the game as it was another chance to see our Euro 2020 qualifying rivals Switzerland. In their two matches in Portugal, the Swiss have looked defensively solid but offensively uninspired, a little too reliant on the creative prompting of their best attacker, Xherdan Shaqiri – on the whole, quite similar to Denmark.

That might sound dismissive until you remember that keeping it tight at the back and hoping your star player produces something at the other end is now the general template for success in international football. The teams that go furthest are the ones that know how to defend and have one good player.

The current world champions, France, have a stable of attacking stars – Kylian Mbappé, Antoine Griezmann, Ousmane Dembélé and so on – to rival any of the top club sides on the planet. But they won the World Cup playing the sort of defensive counter-attacking football that ruled the Champions League 10-15 years ago, in the days when the list of the world’s top coaches would have included names such as José Mourinho, Rafael Benítez and Fabio Capello. The Euro 2016 winners, Portugal, were quite similar.

That style has since been left behind by the top clubs, who have developed and refined the concepts of “static attack” – how to break down teams that only want to defend. It now looks as though that type of football is impossible in the international game, unless your country is lucky enough to have a critical mass of players who all happen to play together for the same top Champions League club.

That was the case in 2014 for Germany, whose first XI largely played for Bayern, and also for the Barcelona-influenced Spain of 2010. This is why the football they played looked more advanced than what we saw from the equally talented French last year. The standard at the highest level of club football is now so high that it’s impossible to replicate for international sides who do not get to train together for hundreds of hours.

This raises questions about what international coaches should aim to do. It’s natural for coaches to try to copy the best in the profession – right now, that would be Pep Guardiola and Jürgen Klopp. But maybe they should instead be following the example of Didier Deschamps in the World Cup last year. Deschamps had most of the French media telling him to be bold, to find a way to put together all of France’s genius attackers, to aim for a style that would thrill the world. He ignored all that. Instead he put together a solid back four, stuck two defensive midfielders in front of them, and trusted that the rest would take care of itself. It was basic, it was boring and seven matches later France were world champions.

Gareth Southgate has been trying to do something a little more progressive with England, as though he believes his job is not only to get results but to slough off England’s historic donkey-football image. Superficially England’s style of play has indeed evolved since Euro 2016, but under pressure against the Netherlands on Thursday night they again went to pieces. They were conscientiously playing the ball out from the back, but it felt as though they were playing this way because they know that this is the way the top teams play now, without really understanding why and how they should be doing it.

The disasters that engulfed John Stones in the build-up to the Netherlands’ second and third goals would not have happened to a defender in a Deschamps team, nor to defenders in England teams of the past: they would have launched it. It also probably would not have happened to Stones playing for Manchester City. He had no excuse for the mess he made of the situation. But as his City team-mate Kevin de Bruyne pointed out on Friday, you shouldn’t criticise him too harshly without acknowledging the flaws of the system in which he is operating.

“I think it’s very difficult for people to understand, but for me he played a good game except the mistake he made. When you play in a team like we do at City, where we play out from the back and give each other options – and then go to another team, try to do the same but you don’t get the options that you get in your normal team, it’s very difficult to play differently,” De Bruyne said.

“I think everybody knows what John’s strengths are, but he can’t do it by himself, he needs the help there. And that’s also what happened, I think, with the third goal. This ball that he gave to Barkley – with us that would be fine, because that ball would probably go to Fernandinho, Gundogan, to the keeper and we play it out from the back. But it’s something we are used to. We have trained for it for three years, every day. You have to look at the full concept, but obviously when you make a mistake, people will judge you.”

Yes, De Bruyne was in part covering for a club-mate who finds himself in a tough situation, but the point he makes is still valid. You can’t expect Stones to play from the back like he does for Manchester City when everyone else is just standing and waiting to see what he does with the ball instead of making themselves available for the pass. It’s as though England are trying to reverse-engineer a Manchester City style of play from studying City on TV, without the hundreds of hours on the training ground that has enabled City to reach that level. They might be better off accepting that no international team is capable of City football. Leave the high-end stuff to the teams in the Champions League. At international level, basic is best.