England third in Nations League after penalty win over Swiss 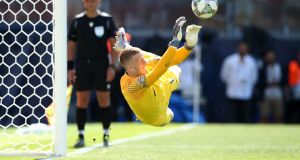 This was a game too far, long before it drifted apologetically into extra time, or culminated in a penalty shootout relatively devoid of tension in the Portuguese sun. It was a fixture which had felt more like a prolonged appeal for the season finally to finish but, in the end, it was claimed by England. Jordan Pickford’s save, diving to his right to push away Josip Drmic’s attempt from the spot, ensured Gareth Southgate’s team have finished an uplifting campaign on a high.

They had come to Guimaraes hoping to secure the inaugural Nations League, of course, and the bag of bronze medals which awaited them back in the dressing room would still feel like an unsatisfactory prize. Yet this team still celebrated prevailing in the shootout – they are making a happy habit of that these days – and, had their slick attacking approach play been accompanied by some bite in front of goal, then this match would have been won at a canter. As it was, it would drag on to subdue even the enthusiasm of those in the stands, a hangover from a slog of a season. At least there was no sting in the tail to endure.

It will have offered Southgate plenty to ponder. England should have established a decisive lead long before half-time, let alone the spot-kicks, having dominated from the outset, monopolising the ball and carving the Swiss open. Theirs had been a patient approach, pinging passes to drag opponents out of position and exploit the space left behind, only for finishing repeatedly to let them down. Harry Kane, bursting beyond Manuel Akanji before conjuring a sublime first-time chip from an unkind angle, had struck the face of the crossbar within 100 seconds of the start, rendering Yann Sommer flatfooted and helpless.

That was an opportunity created from a flash of brilliance. Thereafter, and far too often, England were blunted by profligacy. There was plenty to admire in their buildup play, their chances invariably eked from passing routines which stemmed from Pickford slipping a short pass to Eric Dier or one of the centre-halves at the other end. John Stones, still haunted by his uncharacteristic error against the Dutch, watched on from the bench as Harry Maguire received possession, spun and bamboozled Remo Freuler without even touching the ball. The Swiss press was far less feverish than that whipped up by the Netherlands.

There was fluid movement across a front line supplemented by Dele Alli or Jesse Lingard. But the lack of a clinical finish was exasperating. Raheem Sterling, brighter than in Thursday’s semi-final and scuttling beyond Kevin Mbabu, scuffed a shot at goal from Kane’s lay-off when he should have scored. When he did connect cleanly with a free-kick in the 117th minute, the ball thumped against the crossbar, the woodwork left quivering for a third time. In between, England contrived ways to pass up everything they created.

Alli, completely unmarked as he met Trent Alexander-Arnold’s glorious centre, would guide a header wastefully over the bar. That chance stemmed from a period where the Swiss had endured a protracted chase of the ball, England’s patience twice prompting them to retreat to Pickford in possession before springing up-field again. Danny Rose, fizzing in a cross from the left after another slickly constructed move, would later force a stretching Fabian Schär to prod an attempted clearance on to the far post with Sommer beaten. Once again, the ball did not rebound kindly. Throw in Sommer’s fine saves from Alli and Sterling in quick succession once the game had drifted into the added half-hour, the first chance again created by the excellent Alexander-Arnold, and it was no wonder Southgate had long since adopted more of a pleading stance as he watched on, perplexed, from the edge of the dugout.

The Swiss were generally more direct, their attacking forays decorated by Xherdan Shaqiri’s touches until he limped off in search of a summer holiday, but Rose had choked Haris Seferovic’s chance and Joe Gomez, surely a mainstay of this side’s future, did the same to deny Remo Freuler. It would be Granit Xhaka who would actually stretch Pickford, the Arsenal midfielder opening his body to direct a fine shot towards the far corner as the hour-mark approached, only for the goalkeeper to spring to his right and push the effort away.

Yet, while Swiss opportunities were always sporadic, England’s simply refused to yield them the lead their pressure merited. There was an inevitability that, given their inability to convert what they created, the VAR system would end up denying them as well. Six minutes from time, after yet more fine buildup involving Maguire, Lingard and Sterling down the left, Dele leapt above Ricardo Rodríguez to loop a header on to the crossbar and Callum Wilson, recently introduced, messily shovelled in the loose ball.

The majority inside the arena celebrated with gusto, as much relieved that the threat of extra-time might have been banished, only for the VAR system to penalise Wilson’s shove on Manuel Akanji in the buildup. All of which generated a new chant for the England support to bellow to the beat of their travelling band, even if that hardly felt like a consolation. - Guardian