Pochettino has a big decision to make on Kane, Klopp is trying to arrest dismal final record

UEFA issued 32,000 tickets to Tottenham and Liverpool fans but that has not stopped more than 70,000 supporters of the Champions League finalists from descending on Madrid . Video: Reuters 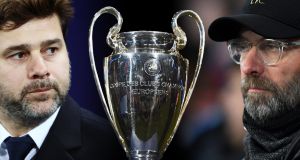 Mauricio Pochettino, manager of Spurs, and Jurgen Klopp, manager of Liverpool. Their teams meet in the Champions League final at the Estadio Wanda Metropolitano in Madrid. Photograph: Getty Images

Three weeks of build up is too much. On Friday afternoon at the Wanda Metropolitano in Madrid, a presenter from Fox Sports Español stood in front of a fridge in the media centre and spent three minutes telling Fox viewers about the range of free sandwiches on offer (ham and cheese, tuna with peppers, “vegetable”).

The coverage of a Champions League final is so intense, the global attention so overbearing, the interviews and questions so numerous and yet so repetitive.

People talk about the pressure and fear of playing in finals, but after three weeks of relentless previews and prognostication, you sense the players of Liverpool and Tottenham cannot wait to escape out onto the pitch and into the game.

Have you heard the one about Jurgen Klopp losing his last six cup finals?

The delicate statistic was not specifically mentioned in the first question he was asked at a pre-match press conference, something about whether he had learned from last year’s final, and certain other finals... but Klopp knew what it meant.

“I know what your question leads to,” he said. “If I would be the reason for losing six finals in a row then everyone has to worry really.”

He insisted that all these defeats had taught him nothing, but that’s not really true. He knows now, if he didn’t before, that when you get to the final, what happens next is pretty much out of your hands.

In 2014 his Dortmund team scored a goal that the officials didn’t notice, and went on to lose.

In 2016 his Liverpool team had a goal ruled out for a foul that only the officials noticed, and went on to lose.

Last year in the Champions League final his best player was injured after half an hour, and his goalkeeper gave two goals away with career-defining mistakes.

Six successive defeats have taught Klopp that in a final you can give it everything and end up with nothing.

“Do you think I had an unlucky career?” was Klopp’s incredulous response to a journalist who asked whether he believed some managers were fated to be lucky and others unlucky.

At least he was trying to sound incredulous. But he knows that in the troll world we now inhabit, losers are afforded no dignity. This evening a series of events that are mostly beyond his control will determine whether he becomes a European champion or a seven-time loser.

Who loses seven finals in a row? It’s the sort of magical feat that gets stitched on to a belt in a Grimms’ fairy tale. He would never hear the end of it.

Klopp does not have to waste much energy brooding over his selection. Liverpool’s defence and front three pick themselves, the captain Jordan Henderson will start in midfield, with Fabinho in the holding role, and the only real dilemma is which one of Georginio Wijnaldum or James Milner will play from the start, and which one will come on as a substitute. With Liverpool you know what you’re going to get.

Mauricio Pochettino made that same point in an interview with the Spanish newspaper El Pais before Spurs’ second leg against Ajax. He called Liverpool a “predictable” team, which sounds a little bit like an insult. But he didn’t mean that Liverpool are predictable in the sense of being easy to read and to stop out on the field. He actually meant that they are a rich team – a team that can afford a big squad that allows their manager to use his preferred system in every game.

Pochettino has no such luxury. Everyone knows that this season Spurs became the first Premier League team to make no signings at all. The response of many big-time managers – particularly the ones who know they could go to some other big team – would be to start thinking in terms of self-preservation. To “raise concerns”. To figure out how to shift the blame for the inevitable failures to come. “How can they expect me to do this job with one hand tied behind my back?” and so on.

Few would have blamed Pochettino if he had come to that conclusion. Spurs’ 2017-18 season had been worse than the season before. They slipped from second to third in the league, finishing with fewer points, fewer goals, more goals conceded, more defeats. Some of the players wanted to leave. Others had fallen out with Pochettino.

It was clear to any realistic observer that the team needed new blood; that without investment the future was bleak.

Luckily for the Spurs chairman, Daniel Levy, Pochettino is not a realistic man. On the eve of the new season he gathered the players together. He knew many of them felt the team was coming to an end. Instead, he told them, this meeting marked a new beginning.

If he had fallen out with them, if they had fought, if they had annoyed him with transfer requests or complaints about money – all that was forgotten now. The club would sign nobody and would not agree to sell anybody. Those who still wanted to leave could instruct their agents to seek a move for them in January: no hard feelings.

He didn’t have to spell it out, but the players understood that anyone thinking about bailing now would be taking the coward’s way out. Instead of optimism, he offered his players a challenge. Help is not on the way. It’s up to us, and only us.

So rather than cry about the lack of signings, Pochettino reframed weakness as strength. If Spurs could not add depth and quality, then they would make up for it with flexibility and determination. If a thin squad meant that they were often without players who were key to their preferred system, then they would become equally adept in every system.

When Pochettino arrived at Spurs he preferred 4-2-3-1, but Spurs have since learned to play 4-3-3, 3-4-3, 4-4-2... The 35-minute comeback against Ajax was achieved with classic English football from the 1970s era that Pochettino loves so much, as big Fernando Llorente knocked long balls down for the flyers, Son, Lucas and Dele Alli. Whatever form these shape-shifters assume, they show the courage and tenacity that has come to define Pochettino’s style.

Tonight Pochettino has a problem he has not had to deal with too many times this season: a selection dilemma. Harry Kane has declared himself fit – but how fit is he really? He hasn’t played since the second week of April, when he damaged ankle ligaments against Manchester City.

In the past when Kane has returned from injury he has usually needed a couple of games to look sharp. Against that, he has scored 65 goals in 87 matches over the last two seasons. He is the golden lion, the highest-profile player at the club. Having done so much to build Spurs into what they are today, it would seem for him a cruel injustice to be left out of the biggest match of all.

If Kane comes in, who makes way? It won’t be Christian Eriksen or Dele Alli, it certainly won’t be Son Heung-Min. If Pochettino picks Kane, he probably has to leave out Lucas, whose hat-trick against Ajax got Spurs to the final. And that might be an even greater injustice. Kane is the indispensable star, but Lucas is the man of the moment, and he’s fully fit.

The decision will tell us a lot about Pochettino’s thinking. He knows that the star of Tottenham’s run to the final has not been Kane or Lucas or Son, Dele Alli or Eriksen. The star is the team, the togetherness, the fighting spirit, the feeling that they are all in it together.

If he picks Kane ahead of Lucas – if he sends out a player who might not be fully fit against Virgil van Dijk, because he scored more goals than the others in the past – he is telling his players that some of them are more equal than others. Other players might see it as the manager pandering to Kane’s status.

Picking Kane will get the top scorer on the pitch, but it also risks undermining the most precious thing that Spurs have got – the trust they have in each other.

For a normal player the decision would be easy: congratulations on getting fit enough to make the squad, now let’s hope you can help us off the bench. So if Pochettino is serious about the team being above any individual, he will treat Kane like a normal player and name him as a substitute. That way he can come on for the closing stages of the game, to a rapturous reception from the Tottenham supporters, and whether Spurs are winning or losing they’ll know they have a potentially game-changing option in reserve.

Of course, it’s easier to draw these conclusions from afar than it is to look into Kane’s eyes and tell him he’s not starting the Champions League final.

In the end Poch will probably close his eyes and let the universal energy be his guide. When it comes to facing the unique pressure of a final, of knowing that your reputation is about to be defined by a series of events that are mostly beyond you control, well, trusting in universal energy is probably as good a way to cope as any other.