McCarthy disinclined to meddle too much with a winning team 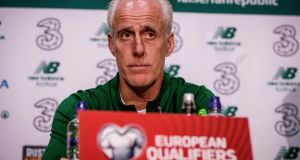 Mick McCarthy: “So long as we win I’m not bothered. I’m not saying we are going out to do anything other than try and play football, but I want to win.” Photograph: Ryan Byrne/Inpho

Having seen his side make slightly hard work of securing their win away there in March, Mick McCarthy will be hoping Gibraltar this evening are less rock and more stepping stone into summer.

In the wake of Friday’s draw against Denmark, Ireland have the opportunity to approach the campaign’s second half with a significant advantage over their two qualification rivals. With the first of two games against the Swiss to come in early September, they are likely to need whatever early advantage they have carved out for themselves.

As he contemplated Gibraltar at home at his pre-match press conference on Sunday, McCarthy was in the sort of cautious form you would expect from a man in his position.

There was a clear sense of satisfaction with the way things have gone to date with performances markedly improved and seven out of nine points secured. There was a fair bit of talk too, however, about how that game at the Victoria Stadium had panned out with Darren Randolph’s save from Roy Chipolina served up as a stark enough warning of just how easily his team might have come up short on the day.

The conditions, he readily acknowledged, were a huge factor with Ireland bringing to mind at times 11 men who had been handed the task of folding some huge sheet in the gale force wind and who had decided to all give it a solo go one after another. There have signs since of a little more cohesion in their performances and outside forces should be rather more favourable at the Aviva Stadium.

Gibraltar head into the game having lost 3-0 in Georgia after which they will have had a tougher time getting to Dublin than McCarthy’s men did when travelling from Denmark. Their Uruguayan coach, Julio César Ribas, is in a position to stick with the starting 11 from the team’s two qualifiers to date and there is no great scope for wholesale changes.

McCarthy has a little more but has made it abundantly clear that he is disinclined to meddle too much with a winning team. Perhaps the most obvious claim staked by a non-starter on Friday was by Alan Judge but the midfielder is out with the broken wrist he suffered in the dying seconds of the game and Kevin Long has a calf strain.

After that, the manager has the likes of Matt Doherty, Callum O’Dowda and Callum Robinson knocking on the door and there would seem to be a decent case for giving getting the Wolves defender into the team.

But having previously declared the experiment of having him play in front of Seamus Coleman in Gibraltar a failure with such an air of finality, he seems unlikely to relent now and the Preston forward Robinson is perhaps best placed to come in from the outset for this one.

Josh Cullen might get to make his debut at some stage although it might depend on the early part of the evening going fairly well.

The 60-year-old admits that he would like to see his side retain possession a little better and cause their opponents a few more problems from play but the points, he inevitably reminded everyone, are what make for prizes and he mapped out a couple of less than pretty ways in which Ireland might secure three this evening and he would still be beaming come the final whistle.

It is a reasonable position to take, especially when the early evidence of the side’s general improvement has been there to see.

But for all the gags about somebody turning the ball home with their “backside,” a much better way to break for the close season this evening would, he sort of admits, be to see his team win really well and a couple of its strikers get off the international mark.

“Yeah, it would be lovely walking off and we’ve had a good result and everyone is happy because the squad has scored a few goals but we are playing against a team who are coming here desperate to stop us doing that and we have to try and break them down.

“For all the football that was played the other night, both goals came from two crosses. They were both brilliant headers but do you call that wonderful, flowing football? I am not so sure. So long as we win I’m not bothered. I’m not saying we are going out to do anything other than try and play football, but I want to win.”

1 Joanne O'Riordan: Why I want to live a bit more like Ted Lasso