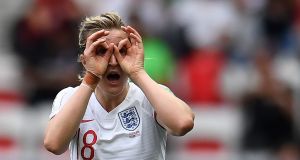 Phil Neville maintained a straight face when, on the eve of kick-off, he claimed he would “love” to be a Scotland player facing his Lionesses but England’s manager was surely being mischievous.

Admittedly Claire Emslie’s late goal made for a slightly nervy denouement and Nikita Parris’s opener came dripping in contentiousness but on a warm, humid evening in the foothills above Nice Neville’s players rarely lost control.

With Jill Scott superb in central midfield, Lucy Bronze and Parris excelling down the right and Ellen White looking a born centre forward, Shelley Kerr’s Scotland team did not really need the England manager’s gamesmanship to turn the excitement of their first World Cup into a demoralising slog.

The modest attendance of 13,188 dictated there were not so much rows as entire tiers of empty seats. It was disappointing but locals felt aggrieved at all tickets having to be purchased by credit card via Fifa’s approved website. With no option to purchase seats from the stadium box office it is perhaps no surprise so many stayed away.

The Stade de Nice lies close to the Var river and it did not take long for its football namesake to be involved in controversy. When Fran Kirby whipped in a cross it hit Nicola Docherty on an outstretched arm.

There was no sign of intent, no hint of hand to ball, and it was hard to see how the Scotland left back could have avoided it hitting her but under the new “zero tolerance” technology-inspired rules it probably was a penalty. Indeed the referee, Jana Adamkova of the Czech Republic, was informed by the VAR official talking in her earpiece that she had missed a clear spot kick and, having taken time out to view replays, Adamkova duly awarded it.

Parris doubtless impressed her new public at Lyon by stepping forward to beat Lee Alexander from 12 yards, lashing the ball into the top corner, but for those used to the pre-VAR world it was hard not to conclude that the law was an ass. Significantly no England player or coach had appealed for the penalty.

The Lionesses were infinitely the better side though and would have scored uncontroversially had Kirby not shot narrowly wide or Alexander not reacted smartly to save with an outstretched leg after Bronze’s swashbuckling run and cross reduced Docherty to a nervous wreck before prefacing a stellar White volley.

White thought she had scored after being put through by Keira Walsh but had been marginally offside and that effort was, correctly, disallowed.

No matter doubt was permeating Scotland’s every move, something only exacerbated when Parris nutmegged poor Docherty.

Kerr has built her team to attack but had opted for caution here. It left Scotland camped in their own half and failing to showcase the opponent de-stabilising skills of Kim Little, Erin Cuthbert et al. Deployed as a lone striker the gifted Cuthbert found herself largely isolated.

In contrast Neville had urged his players to take calculated risks and as White scored their second goal it really did seem a case of fortune favouring the brave. It began with Kirby evading Rachel Corsie’s attentions by getting a toe to a loose ball which fell kindly for the well positioned White. All that remained was for Parris’s replacement at Manchester City to expertly curl her shot beyond the helpless Alexander.

Although Cuthbert was inches away from reducing the deficit after seizing on a rare concession of possession on Walsh’s part – tantalisingly her low shot rolled inches wide of an upright – Kerr found herself confronted by a sizeable problem. Her players were struggling to string two or three passes together and their attempts to change the narrative by hitting England with long balls looked extremely optimistic. Kerr’s challenge was to somehow get Arsenal’s Little in possession in central midfield but Scotland’s trouble was that they repeatedly appeared horribly exposed down the flanks.

Scotland’s first minister Nicola Sturgeon, spotted strolling on the Promenade de Anglais on Saturday, had hoped to see Nice’s seafront turned into La Terasse du Tartan but, amid that balmy Cote d’Azur evening air, the Fifa rankings did not lie. Scotland looked like the team rated 20th in the world to England’s third.

Early in the second half a wonderfully incisive first finish from Beth Mead eluded Alexander but Mead had connected with White’s cut-back and the latter had been offside.

That reprieve made scant difference to Kerr’s demoralised players; Docherty was, sensibly, replaced by Kirsty Smith after collecting a booking for clattering into Parris.

Creditably refusing to fold, Scotland improved a little, winning their first corner in the 65th minute. A menacing inswinger from Weir – who does take a mean dead ball – it momentarily threatened to wrong-foot a largely underemployed Karen Bardsley before ultimately coming to nothing.

Despite conceding twice, Alexander had an excellent game, one second-half save, involving a one-handed diversion of White’s vituperative volley, seems destined to linger in the memory.

Not too long afterwards Bardsley was finally confounded. Unusually Steph Houghton turned briefly slapdash, gifting the ball to Lisa Evans. Her run cut through Neville’s tiring midfield like a jet through cloud before she picked out Emslie who delighted in lifting the ball, right footed into the roof of the net from eight yards.