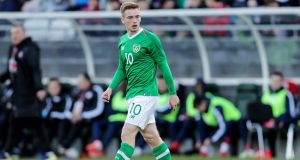 The feelgood factor around Irish football continues after Stephen Kenny’s Under-21s beat Bahrain to secure a place in the Toulon Tournament semi-finals.

Aware that victory would seal a spot, Connor Ronan’s defected free-kick on 33 minutes completed the mission, although they won’t know until later whether it is Brazil or Japan they face in the semis on Wednesday.

Captain Jayson Molumby could have made the victory more comfortable but his penalty, taken just three minutes after the opener, was saved.

Bahrain were already eliminated from contention to progress from the group following defeats to Mexico and China but possessed a couple of talents in their group. Mohamed Marhoon, based in the Czech Republic, is a senior international, while Mohamed Hardan was snapped up by Greeck club Aiginiakos.

Kenny freshened up his team with four changes, a natural consequence of playing their three group matches over six days. Stifling afternoon heat in the south of France was also a factor, affording starts to Liam Scales, Josh Barrett, Aaron Conolly and the youngest member of the group, Jason Knight.

As was the case in the win over China and draw with Mexico, a bright start was the bedrock of Ireland’s performance. Connolly, deployed in a central role this time, was first to threaten, only for a last-ditch tackle by Mohamed Alshamsi.

Darragh Leahy then glanced a header wide from a corner before another League of Ireland representative, Zack Elbouzedi, completely scuffed his shot from eight yards after Lee O’Connor crossed from the right.

It would be the last action for Elbouzedi as a shoulder injury forced the Waterford winger off on 28 minutes, to be replaced by top scorer Adam Idah.

Josh Barrett also went close to forging Ireland ahead when he latched onto Jayson Molumby’s pass to drill a shot to the near post which Ammar Ahmed had to stoop low to keep out.

Also eventually worked was Caoimhin Kelleher. The Liverpool goalkeeper was also required to guard his near post when Ahmed Alsherooqi swivelled from an acute angle to get his shot on target.

Still, Ireland’s pressure began to tell and their lead on 33 minutes, albeit fortuitous, was fully deserved. Deadball specialist Ronan stepped up to unleash his free-kick which took a deflection off Ahmed Mohamed’s back to wrongfoot Ahmed in the Bahrain goal.

It looked to be game over just three minutes later when Ireland were awarded a penalty. Ronan’s exquisite pass released Barrett, who was upended in the box by Mohamed’s lunge.

With Molumby the designated penalty taker, in place of substitute Idah who converted two against China, his strike to the left was parried by Ahmed. Barrett was first to the rebound but dragged his first-time effort wide of the far post.

The Reading attacker almost atoned approaching the break. Good interplay by Idah and Molumby set up Barrett to shoot and it took a superb one-handed save by Ahmed to prevent a second Ireland goal.

Ireland were sluggish in the second half, allowing an older Bahrain side to create a couple of chances to level. Kelleher stood tall from their only real sight on goal on the hour, keeping out Ahmed Sanad’s poked effort from eight yards.

Otherwise, Ireland might have won by more, with Connolly and Molumby going close. Mexico need to beat China by three goals to overtake Ireland for top spot but Kenny’s side will progress as the best runners-up regardless.