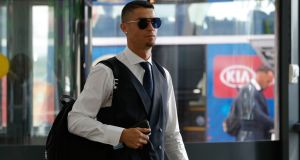 Juventus are increasingly confident of signing Cristiano Ronaldo from Real Madrid, with the Portugal forward having agreed terms on a four-year contract worth a staggering €30m a season.

Ronaldo’s future at the Santiago Bernabéu stadium has been in doubt since the victory over Liverpool in the Champions League final in May, when the 33-year-old hinted he could be about to leave when he stated “it was very nice to be at Madrid”. Having signed a five-year contract with the triple European champions in November 2016, Ronaldo’s agent, Jorge Mendes, had hoped the triple European champions would offer him an extension but it has so far failed to materialise, with rumours of a breakdown in the relationship between the player and Madrid president Florentino Pérez.

Ronaldo has already spoken to the Juventus director, Andrea Agnelli, and indicated his desire to move to Serie A, with the Italian champions increasingly encouraged to believe that a deal for the five-time Ballon d’Or winner could be done.

Despite his release clause being set at €1bn, Juve have offered €100m to Madrid and must now persuade Pérez to accept a fraction of the price they could demand. Talks are understood to be ongoing between him and Mendes, with the agent thought to be line for commission worth up to €10m should the transfer go through.

“If it happens, it will be a new chapter and a new challenge in his brilliant career,” Mendes said to Portuguese newspaper Record after a meeting with Madrid’s, vice-president, José Ángel Sánchez. “If Cristiano Ronaldo leaves Real Madrid, he will remain eternally grateful to the club, the president, all the staff without exception, as well as the Madrid fans throughout the world.”

Meanwhile, Gianluigi Buffon is set to complete his free transfer to Paris Saint-Germain after undergoing a medical on Friday. The former Italy goalkeeper, 40, left Juventus after 17 years last month and is expected to sign a two-year deal.