Still only 19, still a touch raw - he is making it all look suspiciously easy 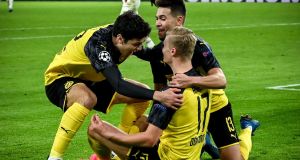 Borussia Dortmund’s players hung back a little, idling halfway between the center circle and the goal. With PSG jerseys slung over their shoulders, the spoils of battle, they clapped each other on the back, they exchanged high-fives, they ruffled each others’ hair. Most of all, though, they waited for him to have his moment.

A few yards ahead, Erling Haaland stood in front of the yellow wall, the soaring south stand of Signal Iduna Park. Just after Christmas, he had finally decided to join Borussia Dortmund, picking the club from a long, slavering queue of would-be suitors, ranging from Manchester United to RB Leipzig. In part because of the prospect of playing in front of what is, arguably, the most iconic terrace in European soccer.

The support of the yellow wall forms a considerable part of Dortmund’s sales pitch. Haaland had, by all accounts, long hoped to experience it. Now here he was, 51 days later, basking in its adulation. He applauded it, a little. He raised his arms above his head in celebration. He offered a thumbs-up. Mostly, he just stared.

Haaland has only just arrived in Dortmund, in the Champions League but he already knows he belongs

In return, the thousands of fans in front of him, the bricks of the yellow wall, showered him with love. In deference to what he had just done, his teammates waited. They let him take the acclaim. Only when Axel Witsel could wait no longer, when he just had to start dancing, did they start to join Haaland. Until then, it was all about him. He has that ability: the capacity to make everyone else a bystander.

Haaland’s start to life at Dortmund has, frankly, been a little unrealistic. So too, for that matter, has been his first season in the Champions League. There is clearly a glitch in the system somewhere. This is, after all, the most exclusive tournament in world soccer. It is the highest level of the game.

It is an aspiration, a dream, the ultimate test. Players spend years hoping to have a chance to play in the competition; many of the finest of their generation will end their careers without ever having made quite the impression on it that they might had hoped. Haaland - still only 19, still a touch raw, still learning - is making it all look suspiciously easy.

He scored a hat-trick in his first game in the Champions League, back in September, back when he was still playing for Red Bull Salzburg. He scored in his next four games in the competition, too; only Liverpool, in his sixth Champions League match, stopped his run.

Then he moved to Dortmund. He was a substitute in his first game for his new club. He came on in the 56th minute. Twenty-three minutes later, he had scored a hat-trick. He scored two more in his next game. The following week, he scored twice in his first start. He currently has eight goals in five appearances in the Bundesliga.

The last 16 of the Champions League was supposed to be a step up, of course, a challenge of another magnitude. PSG is, after all, one of the most expensive teams ever built. It is a team rated - perhaps a little self-servingly - as the favorite to win the tournament by Jurgen Klopp, the manager of the reigning champion, Liverpool. Asking a teenager to carry the fight to a defense of Thiago Silva, Marquinhos and Presnel Kimpembe felt like a bold call from Lucien Favre, Dortmund’s coach.

Those who know Haaland, though, those who have tracked his career from its beginnings in Norway, say that he is a raw talent. He is fazed by little, or nothing. He betrays not a flicker of nervousness.

Strikers considerably more experienced than him might, perhaps, have grown a little frustrated in a first half that was a little more cagey than most expected. Dortmund has won countless admirers in recent years for its sense of adventure, its risk-taking, its dynamism. It has long had a fatal flaw, though: a tendency toward self-immolation, an ability to scupper itself at any given moment.

It is a trait shared by PSG, at least in the Champions League. The French champion’s attack is fearsome - so good that it could afford to leave Edinson Cavani and Mauro Icardi on the bench at Dortmund - but it is not quite good enough to mask what is more a psychological vulnerability than anything else: invariably, PSG seems to melt in the white heat of the competition it has been built to win.

This was, then, supposed to be one of those wild games that occur ever more frequently in this tournament, all breakneck counterattacking and slapstick defending. That was what everyone wanted to see. Nine goals here, split the difference, head back to Paris in three weeks to do it all again - with two notable exceptions: Favre and Thomas Tuchel, PSG’s coach.

It is significant that the coaches of two of Europe’s most expansive teams decided, when the stakes were high, that caution had to come first. Both played with a back five, and two holding midfielders. Both, uncharacteristically, chose to mask their weaknesses, rather than accentuate their strengths.

For more than an hour, the stalemate held: PSG had the possession, Dortmund tried to strike on the break. Haaland, starved of opportunities, stuck to his job: he chased and harried; he took up his pressing positions; he sniffed around for chances. He did not lose heart. He did not lose focus. His moment was coming.

The first strike, to open the scoring, was pure predator: that rare ability that strikers have to somehow turn up at the right place and the right time, stretching out a leg, lifting the ball over Keylor Navas. But it was the second, after Neymar had tied the score, that shook the yellow wall. Darting on to a pass from Giovanni Reyna, the 17-year-old American thrown on as a substitute, taking a touch, and then sending a left-footed shot screeching past Navas.

That was Haaland’s 10th goal in seven Champions League games this season. It was his 11th in his time at Dortmund. Raw data, though, is an unsatisfactory metric to communicate what made it so special: it was the power of the shot, how early he took it, the certainty with which he did so. Haaland has only just arrived in Dortmund, in the Champions League but he already knows he belongs.

His teammates sensed it, too. This, now, is his moment. There is nothing else to do but let him enjoy it.