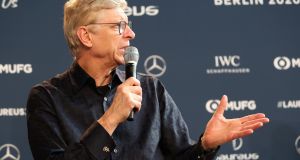 Fifa’s head of global development Arsene Wenger will attempt to make a major change to the offside law which could end a run of contentious decisions in the game since the introduction of the Video Assistant Referee (VAR).

Wenger, who was manager of Premier League club Arsenal for 22 years, wants a player to be deemed onside if any part of their body which can legitimately score a goal is level or behind the last defender.

It will flip the current rule which states the player is in an offside position if any part of their body they can score with is beyond the line of the last defender.

The use of video review has been a source of constant criticism since its recent introduction, including concern about the time to take decisions and the precision with which offsides are judged.

The system sparked another controversy last week in the Premier League when Wolverhampton Wanderers had a goal ruled out against Leicester City after Pedro Neto’s heel was adjudged to be fractionally offside in the build-up.

Wenger will recommend the change during the world soccer’s lawmaking body IFAB’s annual general meeting in Belfast on February 29th.

“You will be not offside if any part of the body that can score a goal is in line with the last defender, even if other parts of the attacker’s body are in front,” Wenger told the British media.

“That will sort it out and you will no longer have decisions about millimetres and a fraction of the attacker being in front of the defensive line.”

Each of the four Home Nations - England, Scotland, Wales and Northern Ireland - has one of the eight votes, with Fifa holding the other four. Any law change needs six votes in favour to go through.

If Wenger gets his three-quarter majority, the new law could come into effect on June 1st - 12 days before the start of the European Championship.