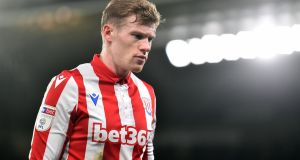 This is far from the first time James McClean has deleted a social media account. Photograph: Nathan Stirk/Getty Images

The world of social media is, it seems, set to be just a little less interesting over the next few weeks after Stoke City announced that James McClean has agreed to shut down his Instagram account. The news was included in a statement from the club in which it also revealed that he would be fined two weeks wages for a post in which he posed in a balaclava for what was clearly intended as a joke about teaching his kids history at home in the current coronavirus crisis.

Not for the first time, the Derryman expressed regret over the incident. “I never wanted to cause any offence,” he says in the statement, “but I now realise that I did so and for that I apologise unreservedly. I have spoken to the club and will be deleting my Instagram account.”

The precise number of times that McClean has been moved to suspend his online presence is unknown at this stage but as far back as June 2015 his former international teammate, Darren O’Dea, joked on Twitter about how good it was to see the then West Brom player “setting up his 673rd account.”

O’Dea suggested to his own followers that McClean was “always worth a follow”. He wasn’t wrong. Any reporters who had been slow to spot that fact received a rude awakening on the bus outside the stadium where Ireland narrowly beat Kazakhstan in September 2012. It was a poor performance, but Giovanni Trapattoni would presumably have taken the view that whatever changes he had made contributed to the two goals his side scored in the final four minutes to secure victory. McClean seemed to think otherwise and branded the decision to leave him warming the bench as a “joke”, which quickly became the story of the night.

Having apparently received a telling off from senior team-mates he subsequently apologised, describing the comment as “stupid and disrespectful” which, as it happens, appears to be pretty much the way a portion of the public in England view the 30 year-old at this stage. There is real vitriol from a minority both on social media and in the stands, abuse McClean has repeatedly confronted head on. There is also, it must be said, plenty of support too.

The pity of Thursday’s incident, however, is that he is bound to have lost just a little of the middle ground; those who admire, or at least grudgingly respect, his stand on the Remembrance Day Poppy issue; a position of principle for which he has been left to pay a consistently high personal price.

His letter to Wigan owner Dave Whelan explaining his stance in 2014 remains the only real articulation of why the inclusion of poppy emblems on club shirts around Remembrance Day might not be universally regarded as a benign gesture. His case was compelling and though the circumstances outlined are very particular to him, he cannot possibly be the only one to be discomfited by the ritual; especially as the part played by clubs has become increasingly mawkish with each passing year.

When back home either on international duty or for other events, McClean has been consistently willing to publicly argue his case to the press on this and other issues. When he does, whether you agree with everything he says or not, he comes across as considered and, it is abundantly clear, having the courage of his convictions.

The very fact that he expresses them makes him stand out in an age when most players have had it hammered into them by their clubs how important it is to keep things so terribly safe in interviews.

On his most recent public engagement in Dublin, as part of a conversation about sectarianism, he acknowledged the increasing levels of support he had been receiving from the Professional Footballers’ Association in England. The union had been slow to stand up for him given the persistent abuse he has been subjected to but its officials are bound to have felt a little let down by him this week now that they finally had.

The event he was speaking at was the opening, by the insurance company Aviva, of a sensory hub in Lansdowne Road, a facility aimed at providing a space at the stadium in which people, particularly kids, with autism or similar conditions, might feel more comfortable if the noise or crowds outside were proving too much.

As his daughter Willow played with her mother Erin in an adjacent room, McClean spoke wonderfully well of what it is like to be the parent of a young child with autism.

What he didn’t say was that having agreed for the whole family to undertake a 14 hour round journey in order to be at the event, he donated the entirety of his fee to AsIAm, a charity that advocates on behalf of those with autism and their families. More recently he has been helping to fund parcels of food and other essential items for those affected by the current crisis in his native Derry.

None of which make Thursday’s online joke, or some of his previous online comments, any easier to understand; quite the opposite really, but he has previously laughed about the fact that Erin does her utmost to keep him off social media.

A succession of his managers, more than one of whom has found himself fielding questions about his online pronouncements, will doubtless have wished her well every step of the way.

The fact that a couple of those managers have also been from the North has probably been helpful but then former Republic of Ireland boss Martin O’Neill, who clearly had a soft spot for him, still branded some of his utterances “ridiculous”.

His current manager at Stoke City, meanwhile, Michael O’Neill, might just be relieved now that there is to be a brief spell of radio silence but he knows as well as the rest of us: account number 674 can only be around the next corner.

1 FAI council member raises concerns about governance of organisation
2 Gerry Thornley: Stoppage could tip balance in favour of big money teams
3 Increase in membership a plus for adapting golf clubs
4 Ken Early: Why international football is fading into obscurity
5 ‘A radical departure’: Who are CVC and what are their plans for rugby?
Real news has value SUBSCRIBE
Crossword Get access to over 6,000 interactive crosswords