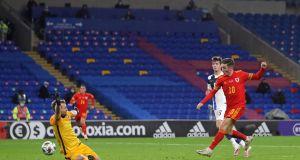 Wales secured promotion to the top tier of the Nations League with a 3-1 win over 10-man Finland in Cardiff.

Harry Wilson, Daniel James and Kieffer Moore were on target as Wales moved up to League A and virtually guaranteed themselves a 2022 World Cup playoff spot.

Teemu Pukki had halved the deficit to set up an anxious half-hour for the Dragons, but Moore’s header six minutes from time eased Welsh nerves.

Finland needed to win to deprive Wales of top spot in Group B4, but they were forced to play with 10 men for 78 minutes after Jere Uronen hauled down Wilson with the forward through on goal.

Uronen had failed to deal with Danny Ward’s long goal-kick and Spanish referee Jesus Gil Manzano was quick to brandish his red card.

Wales were unbeaten in 10 competitive matches, a record-matching run in their history, and had kept seven successive clean sheets in that sequence.

A first Nations League win continued to elude Northern Ireland as they were held to a 1-1 draw by Romania hours after relegation from League B had been confirmed by events off the pitch.

Eric Bicfalvi struck in the 81st minute to cancel out Liam Boyce’s goal and make it 10 games without a victory for Northern Ireland in a competition they will be happy to see the back of for the next two years.

When it does return in 2022, Northern Ireland will find themselves in League C, facing the likes of Azerbaijan, Kosovo, and Georgia, after Uefa announced in the hours before kick-off that Romania had been awarded three points for their cancelled match against Norway on Sunday.

That left Northern Ireland six points behind their opponents, the latest blow in a miserable international window which began with the end of their Euro 2020 hopes in defeat to Slovakia on Thursday.

Scotland missed out on promotion after going down to a 1-0 defeat in Israel. Manor Solomon scored on the counterattack a minute before half-time to allow the Czech Republic to leapfrog Scotland and take top spot in Group B2 following their 2-0 win over Slovakia.

Scotland had enjoyed a dangerous spell before the goal and looked threatening immediately after the break but some attack-minded substitutions failed to transmit into chances as Israel held on to their lead.

Steve Clarke’s side had come into November four points clear at the top but consecutive defeats cost them. Winning the group would have put Scotland in the running for two World Cup playoff places that come via the Nations League, if needed, while promotion to the top tier would have enhanced chances of making Euro 2024.

Phil Foden netted twice as England’s new generation staked their claim for a place at next summer’s European Championship and brought a challenging year to a convincing end against Iceland.

From Harry Maguire’s Greek court case and the high-profile bubble breach by Mason Greenwood and Foden, to injury headaches, empty stands and his own bout of Covid-19, this has been a tough autumn for boss Gareth Southgate.

But a strange, testing and truncated international year came to a comfortable conclusion at Wembley, where Foden netting his first England goals after Declan Rice and Mason Mount efforts to seal a 4-0 win.