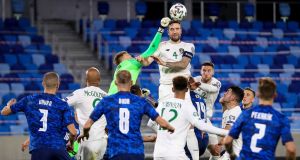 Tony O’Donoghue gave us Stephen Kenny’s starting XI on the six o’clock news, but instead of standing pitchside in Bratislava he was sitting in his house in front of a bookshelf – one that was perfectly fine but not a patch on Bryan Dobson’s, which, as we know, set the lockdown-bookshelf standard months back. All that it was missing was the Book of Kells.

Evanne Ní Chuilinn then tried to make contact with RTÉ’s football panel in a neighbouring studio, but while we could hear Kevin Doyle and Richie Sadlier, we couldn’t see them, someone having forgotten to turn on the lights. Instead, while their voices filled the air, nattering about James McClean’s surprise selection, all we could spot through the gloom was a silhouette of a man who looked suspiciously like Darragh Maloney.

There he was, trying to read his newspaper in the dark at his desk, him surrounded by a set so Eurovisiony we wouldn’t have blinked if Michael Flatley suddenly tapped his way across the floor.

Seven o’clock and the lights were on, so we could see Darragh, Kev and Richie as they discussed their bewilderment at Aaron Connolly and Adam Idah not even making the bench. At which point word came through from the FAI that a second backroom staff person had tested positive for Covid-19, so we were left wondering if that explained Connolly’s and Idah’s disappearance from the squad. Had they been close contacts? Which left us all pining for simpler times when it was tweaked hamstrings, strained groins, stubbed toes and the like that prompted late team changes.

Darragh tried to lift our spirits by playing two stirring montages, one of which was soundtracked by Andra Day’s Rise Up and featured the couplet “and it feels like it’s getting hard to breathe, and I know you feel like dying”, which was, under the circumstances, unfortunate.

He also invited people to use the #RemoteSupporting hashtag to send in photos of them remotely supporting Ireland, so half of Ireland’s pooches were kitted out in green jerseys and snapped. When we saw a doleful Ozzy the Labrador, all we could think of was Kay Burley and “sadness in his eyes”.

But Ozzy must have forgotten that Kenny is now in charge, so watching Ireland promises to be significantly less painful than during the previous regimes, the evident ambition being to actually pass the ball to each other and venture forth.

Would James McCarthy be part of this positive process? “Some people think he’s a footballer – he’s not,” said Kev, in an assessment that seemed a little harsh, although he qualified his appraisal by pointing out that McCarthy’s gift is to break up the play and stop others from playing football. An anti-footballing-footballer, then.

Darragh, meanwhile, was wondering if this game would be “one of the defining moments of [Kenny’s] tenure”, which, he conceded, was a mite tough considering this was only his third game in charge.

A game of sizeable consequence, then. Kev (confidently) and Richie (nervously) went for a 1-0 win for Ireland, while Darragh just prayed that it wouldn’t go to penalties because his nerves couldn’t stand it.

Until then, the chief highlights of the evening had been George Hamilton resisting preceding Ondrej Duda’s surname with Zip-a-dee and him managing to remain calm despite a photographer operating his camera quite close to his ear for the entire first half, soundtracking George and Stephen Kelly’s commentary with endless clickety-clicks.

Mind you, that Shane Duffy goal-line block deserved no end of clickety-clicks. Men have had statues erected for less.

Half-time and the panel saluted Ireland’s 45 per cent possession, which felt like 44.3 per cent more than we used to have away from home. Progress. But: “Respect the ball a little bit better,” advised Richie, reckoning possession is only useful if you actually do something with it.

Which neither our lads nor Slovakia did. Until they were granted possession of penalties and started converting them.

Soon after: “The dream dies.”

Alan Browne and Matt Doherty getting that Daniel Timofte feeling.

A bit like the RTÉ studio earlier in the evening, our Euro 2020 lights went out.

1 Munster beat Glasgow to keep their winning streak going
2 The Offload: Ireland are stuck in no man’s land
3 New Killarney athletic track another jewel in the Kingdom’s crown
4 Every kind of wind imaginable was against Tipperary football - and they came through
5 Ken Early: Roles have reversed for Guardiola and Mourinho
Real news has value SUBSCRIBE
Crossword Get access to over 6,000 interactive crosswords