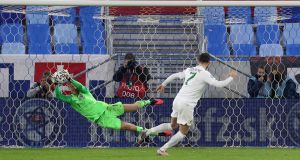 Alan Browne’s penalty is saved by Slovakia goalkeeper Marek Rodak during the shoot-out during the Uefa Euro 2020 playoff semi-final at the Tehelné Pole Stadium in Bratislava. Photograph: Alexander Hassenstein/Getty Images

The Irish will be neutrals when Euro 2020 comes to Dublin next summer after Stephen Kenny’s side was beaten here on spot kicks. It was a cruel ending to what had seemed a good night because there was much be proud of in terms of the performance. Ireland, though, did not have the wherewithal to convert the chances they created and when that failing persisted into the penalties, it cost them dearly.

After Conor Hourihane and Robbie Brady had converted theirs, the team’s long campaign to make a tournament the country will play a part in hosting, came down to Marek Rodak’s save from Alan Browne and a Matt Doherty effort that came crashing back off the crossbar. Darren Randolph came close to stopping three of the four he faced but ultimately couldn’t quite make the save required to keep Ireland in it.

In other circumstances, the outcome might not have felt quite so disappointing but the visitors were the better side on this occasion for long stretches, threatening to win the game in much the way their manager has spoken about wanting his team to play.

Browne and Hourihane will be haunted by the chances they passed up to clinch their side’s place in next month’s playoff final and though Kenny wasn’t keen on having Robbie Keane as one of his assistants, what he surely would have given to have had a natural goalscorer out there on the pitch.

As it was, the manager revealed not long before kick-off that two of the team’s prospective threats, Aaron Connolly and Adam Idah, had been excluded from the squad on the basis, it is believed, that they had been in close contact with at least one of two association staff members who had tested for positive for coronavirus over the past couple of days.

The loss of Connolly looked a particular blow but James McClean came in while Callum Robinson rather than Callum O’Dowda started on the right of the front three and the West Brom striker found himself with a very early chance to give the visitors the lead. The chance fizzled out, though, as he lacked support inside the area and it would be almost half-time before either goalkeeper was actually tested.

For the bulk of the first hour there was next to nothing to choose between the teams. Both pushed it around midfield quite well but struggled through the early stages to carve out clear scoring opportunities further up the field.

Ireland were much improved on last month, though, working hard to press their opponents high up the pitch and patiently looking to use the ball well when they won it. Penetration remained an issue against a determined defence but when a prolonged period of possession ended with Doherty crossing to the far post, Ondrej Duda’s stumble allowed Hourihane to lay the ball off for McClean who should have done better with the shot.

The visitors suffered a couple of scares just before the break when Duda first forced a fine save from Randolph with a curling shot that was heading for the bottom right corner then narrowly missed the target with a more spectacular effort from the resulting corner.

For the home side, Marek Hamsik was as influential as ever, constantly looking to get on the ball in and using it well although he also played a key role in Ireland’s first really good chance of the second period with the Slovak captain heading an angled Hourihane free from the just wide of his own left-hand post.

From then on, though, the visitors proved increasingly effective at creating for themselves, with putting them away the stumbling block. David McGoldrick was increasingly influential and he was at the heart of much of what Ireland did well in attack.

When he fed Brady and the Dubliner quickly pushed the ball out towards the right of the box, Rodak did well to save from Browne but really shouldn’t have had the opportunity. Most of the same cast was involved a little later when Hourihane’s close-range effort was stopped on the line by Juraj Kucka.

It wasn’t all one way with Shane Duffy having to prevent a low strike from Lukas Haraslin reaching the target but Ireland were comfortably the more dangerous side through the bulk of the second period and into the first of extra time with Rodak having to save again, this time from McGoldrick after which Browne hit the post following good work by O’Dowda and Brady as the pair worked their way in down the left.

Clearly believing they had the winning of the game, they kept pushing for the goal they needed to win the game but it wouldn’t quite come and so their place in next month’s playoff final came down to a penalty shoot-out which they lost without the hosts having to take their last one.

There was much evidence here of the potential Kenny says he wants to unlock but that will not have been of much consolation. Ireland will not be at their own party next summer.