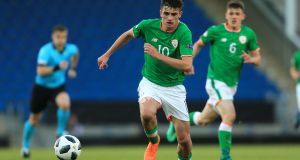 Stephen Kenny’s game-plan worked a treat as substitute Troy Parrott supplied a second half brace to clinch a precious qualification victory for the Republic of Ireland in Sweden, keeping them top of their under-21 Euro 2021 qualifying group.

Second seeds Sweden led at the interval in Kalmar courtesy of a sumptuous strike from captain Mattias Svanberg but Ireland recovered from a missed penalty to bag three goals in the final 22 minutes.

Tottenham forward Parrott struck either side of Conor Masterson crowning his 21st birthday with a first goal at this level.

With only the top team from the group guaranteed to qualify for the 2021 finals, a crucial meeting with first seeds Italy looms in Dublin on October 10th.

Ireland have won all three games while Italy prevailed 5-0 in their opener against Luxembourg today. A runners-up finish will secure at least a play-off.

Kenny took a gamble by dropping Parrott following his goalscoring debut in the 1-0 win over Armenia. Much hype has surrounded the 17-year-old but the manager adopted a different approach to this encounter, stressing he always planned to load the attack as the game progressed.

“Troy showed tremendous character tonight,” noted Kenny afterwards. “He played so well on his debut against Armenia but there was a tactical reshuffle to cope with Sweden’s midfield. We couldn’t start with four strikers.

“We knew that a strong finish would be needed. If we controlled midfield, we could spring the forwards and finish strongly.”

Pure 🔥 as Stephen Kenny's side turn on the style in Sweden 👏

Still, Sweden survived an early scare when Aaron Connolly cut in from the left and curled his low shot just past the far post of Pontus Dahlberg.

The Watford goalkeeper was kept busy by the Irish but only after the hosts made use of a strong period to forge ahead on 19 minutes.

Bologna midfielder Mattias Svanberg finished off a flowing move with a first-time 35-yard rocket which found the top corner.

When Danny Mandroiu left the pitch clutching his hip six minutes into the second half, Kenny summoned Parrott.

He was requesting the ball on 64 minutes when Connolly was tripped inside the box by Svanberg but the creator of the penalty took it, only to see Dahlberg fling himself the right way and push the effort away.

Four minutes later, Ireland were level. Parrott was perfectly placed to find the root of the net with a first-time striker after Jonathan Afolabi’s left-wing cross was only half cleared.

It was all Ireland at this stage and after captain Jayson Molumby squandered a close-range effort by heading wide, Masterson showed him the way by evading his marker to make it 2-1 with a header on 86 minutes.

Parrott added the third on the break in stoppage time by dinking the ball over Dahlberg after his initial effort came back off a defender.

“When we lost our way for a 15-minute period in the first half, Sweden played well and capitalised with the opener,” said Kenny.

“There’s no question that we deserved the victory. We could have won it by any amount.”

1 Gordon D’Arcy: There’s more to Saracens’ success than money
2 Seán Moran: Total disregard for schools as GAA votes one way and acts in another
3 10-man Arsenal show their heart to rescue a point at Chelsea
4 As the UK tightens gambling laws Ireland still lags way behind
5 Naomi Osaka and Coco Gauff set up repeat showdown in Melbourne
Real news has value SUBSCRIBE
Crossword Get access to over 6,000 interactive crosswords