Solskjaer will trust youth and says Sanchez ‘had to go’ 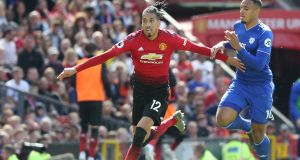 Ole Gunnar Solskjær has said he trusts Marcus Rashford, Anthony Martial and Mason Greenwood to be Manchester United’s centre-forwards after allowing Alexis Sánchez to be loaned to Internazionale.

Romelu Lukaku, the top scorer of the past two seasons, has been sold to the same club yet Solskjær is not concerned regarding his striker options.

“For me it’s time for our boys to feel that pressure and responsibility, to be more robust, to know they have to play five games in a row. I trust the fitness staff and medical staff and the pre-season work; we’re mentally and physically more ready. That’s the next step for our young players.

“Alexis needed to go – at the moment we know he’s been here for 18 months and it’s not really worked out for him. For him to restart and get himself playing regularly and scoring goals, that will only benefit everyone in the end. For us we’re going to watch every weekend to see Romelu and Alexis playing together. He [Sánchez] will come good for them.”

Solskjær wants his team to target clean sheets after keeping one in the opening victory over Chelsea before conceding in the draw at Wolverhampton Wanderers and Saturday’s home defeat by Crystal Palace.

“Clean sheets are always the foundation to build upon,” he said before Saturday’s game at Southampton. “We started really well against Chelsea – David [De Gea]made some fantastic saves. The last two we’ve conceded three goals and they’ve had three shots. What can you do about the [Rúben] Neves goal [For Wolves]? The two against Palace should have been avoided. We hope to go down there and look stronger at the back, it’s something we’ve always needed at this club.”

Chris Smalling has flown to Italy to conclude his loan to Roma. “It’s just come up the last couple of days, this opportunity for Chris,” Solskjær said. “We’ve sat down and discussed it – at the moment we’ve got six fit centre-backs.

“I couldn’t promise Chris regular football, so he’s on the plane over now. I think he’ll enjoy the experience. It’s a big club, a big league, not many English players have had the chance to play in Italy. He’ll come back stronger and fitter for it.”

Of Matteo Darmian’s future Solskjær said: “I can see maybe Matteo [leaving]. There’s been some interest in Italy. Marcos [Rojo] is staying definitely. We’re a squad now that is less in numbers but still big enough and strong enough to have coverage in all positions.” – Guardian