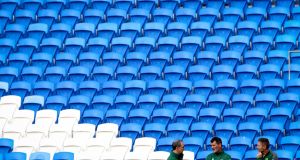 There are plenty of pre-match press conferences where it seems like there is almost nothing left to be asked about or said. But, between the rough and tumble of the last two meetings between these sides, the long list of Irish injures, those other two absentees, the Danish debacle and the fact that this will one of the opening in games in a convoluted competition that Uefa have simply ensured everyone must care about, it was difficult to know where to start in Cardiff.

Ireland, in short, can have played few games down the years with such an avalanche of context. Ultimately, though, the aim remains the same: his side will try to win, promised Martin O’Neill but be pretty happy, he readily acknowledged, to head for home with a solitary point.

Alan Browne became the latest player to be ruled out of the game on Wednesday with the Preston midfielder stymied by a calf strain and O’Neill observed, in an understated sort of way, that the situation is “not ideal” but, as he often does, he pointed to the spirit within a squad that has sprung the odd surprise during his time in charge, not least here last year.

The manager smiled as he cited the example of James McClean who, he said, had been talking about getting some sort of cast on so that he could play this evening even as he was being taken away to hospital in the wake of breaking his wrist in two places on Tuesday. There is a madness to the 29-year-old who can often struggle to effectively channel that devotion to the cause, but he is likely to be missed tonight at the Cardiff City stadium where his well struck goal was the difference between the two sides last October.

In his absence, and with the likes of Shane Long, Robbie Brady and James McCarthy all out too, there may be an ever so slightly makeshift feel about the team and O’Neill hinted at handing someone a debut with Callum Robinson possibly in line to be thrown straight in.

If Ireland have a vaguely unfamiliar look about them here, however, it may be nothing compared with the side Denmark put out on Sunday in Aarhus where the Welsh may find themselves up against players from the lower leagues if a solution is not found to end the incredible stand-off in progress between the country’s federation and its established stars.

“If it does develop like that,” said O’Neill, “there will certainly be a degree of unfairness about it and I think everyone would accept that’s the case. If they do not play the top players, you mentioned earlier about players playing from the lower divisions, it would give a massive advantage to the opposition.

“We’ll have to wait until things develop. The situation might be resolved in the next few days. We’ll just have to wait and see.”

Asked if he felt Uefa would have to act to resolve the situation if the Danes do not seem to be managing to do it themselves between now and the weekend, he suggested he does.

“Do you know what? I think they probably will if that’s the case and it develops in the direction it looks to be going.”

It is actually believed by some in Denmark that Uefa have privately played down the threat of major sanctions against the federation there as long as the game goes ahead but it is difficult to imagine the FAI allowing the matter to rest in the event that the Welsh run out big winners.

The Danes, the FAI, will surely argue, are in breach of tournament regulations which oblige associations to field their strongest possible team in all Nations League games. For its part, the DBU might contend that they will be doing just that but with their regular players having offered to extend the old commercial rights deal for these games, it appears to be in the organisation’s gift to field its biggest stars on Sunday and their failure to do so would clearly damage the integrity of the three team group.

A few months ago, O’Neill might have been a little more relaxed about the situation but despite the jokey reference here to nobody really understanding the Nations League, it is clear now that he is entirely on top of its significance.

Failure to finish in three team group’s top two will be the mean being a third rather than a second seed when the draw for Euro 2020 qualifying groups proper is made in Dublin in December and even finishing second would likely be enough to provide the team with a play-off safety net in the event that next year’s games don’t go so well.

Against a strong Welsh side, perhaps still a little stung by the way things turned out last time, a depleted Irish one may well be up against it but Ryan Giggs seemed less inclined to take anything for granted than a few of his countrymen did last year.

If Gareth Bale has one of those nights then all bets could off but failing that, Wales might just have their work cut out again.

1 Rory McIlroy: Maybe I’m just not as good as I used to be
2 My sporting disappointment: Jimmy White and the elusive World Championship
3 Ken Early: PSG would be sensible final move for Ronaldo
4 World Rugby push back on extending residency rule
5 The Offload: Joe Schmidt the influencer is due a second act
Real news has value SUBSCRIBE
Crossword Get access to over 6,000 interactive crosswords