Mick McCarthy: ‘I’m comfortable with how I dealt with Roy Keane’ 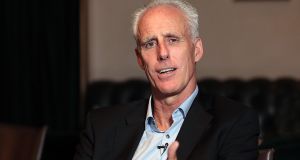 You tell Mick McCarthy that the man in the flowery shirt sitting across the way is a judge from Dancing With The Stars. Would he ever be tempted to give the show a go?

“Actually,” he says, “I was asked by the very first Strictly Come Dancing if I was interested.”

But, he reminds you, he’ll be 60 next February, so he’s finding his inner daredevil. “Would I consider it now? Well, I guess if I was retired – which I’m not – yes, I would consider making a fool of myself, why not? I might even be able one day to have a dance with Fiona [his wife] when the music comes on, instead of scarpering.”

He’s up for it, then, but not just yet. There’ll be time enough for foxtrotting and the like. For now he just wants another opportunity to do what he believes he does best: football management.

Virgin Media Sport – the artist formerly known as TV3 – has just announced that he has been signed up to their punditry team for the season ahead, joining Graeme Souness, Brian Kerr, Niall Quinn and Kevin Kilbane, amongst others, in its line-up. His debut is Thursday’s Nations League game between Germany and France.

“I love doing it,” he says, but there’s a but. “I’m hoping it’s temporary because I want to go back to what I’ve being doing for 26 years, something I think I’m good at doing, to be honest. I’m enjoying doing the media work, but if the right opportunity came along I’m ready to go back in to management. Only championship or above. Who knows, there might be someone in the Premier League struggling at some stage.”

His last managerial shift ended in no little acrimony at Ipswich back in April with the boos of the supporters ringing in his ears. Why would he want to go back to all that?

“Because it’s what I do, it’s what I am, a manager. It was frustrating that there wasn’t more comprehension about what was going on at Ipswich. We’d sell a player for £8 million and buy one for £300,000; we’d sell one for £3 million and take a free [transfer]. But I think they were just bored with me, and bored with the fact that there was no money being spent. I spent around £3 million in five-and-a-half years; since I’ve left they’ve spent £8 million in five months. But they’re second from bottom of the league with three points. After six games last season we were top of the league.”

This summer, then, was a rare enough treat, in that he had time to spend with his family, time to relax. “I’ve loved it,” he says. “The phone wasn’t ringing non-stop, no emails. I went away to Florida, played golf, my kids came out to Orlando, it was my wife’s 60th last week. My two daughters are on maternity leave, I joined them in Portugal for a couple of weeks. I’ve done things that I used not be able to do. But when you’re busy you think it’ll never stop. When you’re not busy you’re wondering why people aren’t getting in touch.”

You don’t mention Roy, but he’s assuming he’ll pop up in the conversation, so he strikes first.

“What happened 16 years ago [in Saipan] is brought up every time I come over. It came up again in the summer. I said then that I’ll be an old git of about 75 with a flat cap, a dog and a ferret in my pocket and someone will say, ‘There’s that old sod who fell out with . . . ’ and it’s coming to pass already.

“I’m being asked again about it all because of Harry Arter. But I don’t know what’s gone on between him and Roy, so it’s really unfair for me to comment. My career has been spent having real happy camps, people who want to play for me. I spent my life managing players, tickling their bellies and patting their backs; I spin people’s plates and keep them up in the air, unfortunately sometimes they fall on your head.

“Roy and myself had one of the biggest falling-outs ever. I offered an olive branch and asked him to come back; I was much more of a mediator through it all than I was ever given credit for. What happens now with Harry, I don’t know. It’s up to them to deal with it. I dealt with it my way – and I’ve been living with it ever since. And by the way, I’m as comfortable about it all as a pair of slippers.”

“I’m sympathetic to him. He’s 19. I’m 60 in February. The only good thing that age has given me is perspective on life – and grandchildren. Perspective on life means I can think a lot more thoughtfully about what they’re asking Declan Rice to do. He’s so young.

“I don’t know what’s being said to him, but if I was Gareth Southgate I’d be pointing to this young and vibrant England team’s brilliant World Cup, and how bright the future is. I’d be saying ‘there’s John Stones, there’s Harry Maguire, there’s you,Walker on the right side, I’ll get you in’. That’s a powerful argument.

“I know Kevin Kilbane was angry about it all, about Declan not committing, but I just said, ‘Did any of us ever have that option?’ We didn’t. I’d be half-tempted to say to Declan: don’t play for anybody, play 30 Premier League games this season, and they’ll all be clamouring for you. Then you can make your choice. Whatever is right for you. That’s my advice to him.”