Ireland v Denmark: Everything you need to know about the Uefa Nations League

Ireland take on Denmark in Dublin on Saturday - but how does the competition work? 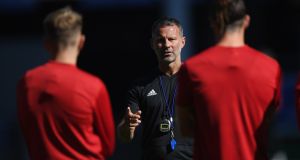 Ryan Giggs’s Wales are in Ireland’s group for the Uefa Nations League along with Denmark. Photograph: Stu Forster/Getty

No sooner have Europe’s major leagues got back under way, then along comes the international break to disrupt the early season rhythm.

As good as the World Cup was – and it was very good – international football is often seen as an unwelcome distraction from the domestic calendar. A fortnight of drab matches and a chance for key players to get injured.

However, meaningless friendlies are now – almost – a thing of the past thanks to the Uefa Nations League, which gets under way across Europe this week.

The new competition is designed to breathe life into international football outside of major tournaments and qualification, and to turn dead rubbers into meaningful fixtures by offering sides an alternative route into the 2020 European Championships.

However – it’s complicated. Indeed, in the words of England’s Harry Maguire, “it is confusing, but we are trying to get our heads round it”. Aren’t we all, Slabhead.

Ireland play their first Nations League fixture away to Wales on Thursday night. Before kick-off in Cardiff – and in a bid to lift the confusion – here is all you need to know about the new competition.

The Uefa Nations League is a new competition designed to put the spark back into international football across Europe. It consists of 55 teams split into four leagues – including Martin O’Neill’s Republic of Ireland.

The 55 nations have been separated into four tiers based on their Uefa rankings at the end of qualification for Euro 2018 – A, B, C and D. Naturally, the best teams – France, Germany, Spain etc – are in league A. Group D contains the likes of Andorra, Belarus, Kosovo and Malta. Ireland slot nicely in the middle in League B.

Within each tier – or league – smaller groups have been drawn. Each group contains three or four teams. Teams will play each other home and away in a normal group format – the winners earn promotion to the league above, the bottom team get relegated to the league below.

Who is in Ireland’s group?

Ireland have been drawn against familiar faces Wales and Denmark, who they played during the ultimately doomed attempt to qualify for the 2018 World Cup.

When does it take place?

The action gets under way on Thursday, before the final group fixtures are played in November – Ireland’s final game is away to Denmark on November 19th.

The four group winners from League A will then enter the finals next year – two semi-finals and a final to decide the inaugural Nations League champions. The final takes place on June 9th, 2019, the aim being to plug the gap in a summer with no World Cup or European Championships.

What about qualification for Euro 2020?

The Nations League will run as a separate competition to the qualifiers for the Euros – but it will play its part in qualification.

The number of teams taking part in the European Championships was expanded from 16 to 24 for Euro 2016. This number is being retained for the 2020 edition, which will take place at a number of venues across the continent.

There will be 10 qualification groups – five containing five teams, five containing six – and the top two teams from each group will qualify for the tournament, leaving four extra places up for grabs. This is where the Nations League comes into play.

A gateway to the Euros?

These final four places will be decided by a play-off – with each of the four Nations Leagues providing a qualifier.

Each Nations League will provide four teams for the play-offs, with priority being given to the first-placed team in each group. However, if that team has already qualified for Euro 2020 via the traditional method – as is likely in League A – that play-off place will be handed to the next highest-ranked side from the league (rather than the individual group).

If there aren’t enough teams within a league to conduct a four-team play-off – for example, it is likely 10 of the 12 teams from League A will have already qualified – then the numbers will be made up by plucking sides from the league below. This won’t include the group winners, however, so they aren’t disadvantaged by having to play-off against a higher-ranked side.

This effectively means the bigger teams have a safety net should they fail to qualify for Euro 2020 first time out, while it also gives the minnows of League D a fighting chance of making it to a major tournament.

When is all this going to take place?

The timeline is as follows:

And does all this mean no more boring friendlies?

Unfortunately, no. Friendlies will still take place in order to fill gaps during each international window and satisfy broadcasters. Which is why Ireland travel to play Poland in a friendly on Tuesday September 11th.

Ahhh, there’s nothing like the magic of the Uefa Nations League.

Life was simpler when they just played friendlies.