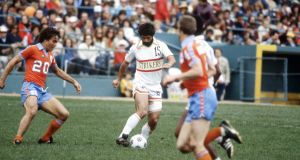 Former Germany striker Gerd Mueller in action for the Fort Lauderdale Strikers during an NASL game circa 1979. Mueller played for the Strikers from 1979-81. Photograph: Getty Images

Early in the 1978 NASL season, the Fort Lauderdale Strikers had suffered three heavy defeats in a row and the fans were restless. The manager, Ron Newman, decided to take drastic action.

Moments before kick-off at their next home match, an undertaker drove a hearse out from under the stand and into the centre-circle. As the crowd wondered exactly what was happening, Newman emerged from a coffin with a dramatic flourish, ran to a microphone and announced, “We’re not dead yet!”

The Strikers won that night, went on to make the play-offs that year and the legend was cast.

Equal parts salesman, carnival barker and footballing evangelist, Newman signed, among others, George Best, Gerd Muller, Teofilo Cubillas and Gordon Banks (coming out of retirement, blind in one eye) to the Strikers but he still felt a certain air of showbiz was necessary to help the box office.

So the team arrived onto the field by a different and more novel mode of transport for every match. These included horses, fire engines, a double decker bus and Harley Davidsons.

Newman died at the age of 82 last month. He is survived by his wife Olive, a son, a daughter and a sport that will be forever in his debt.

There would not be a Major League Soccer today without him and a handful of other resourceful missionaries who kept alive the very premise of a professional game, even in dingy indoor arenas, in the dark days of the 1980s and early 1990s.

It was an unlikely calling for somebody who began his working life as a carpenter’s apprentice on the Portsmouth docks before going on to play 118 times for his home town team.

He was a journeyman with Orient when a contingent from Atlanta lured him to the Deep South, partly by ordering lobster at a dinner meeting in London. Having never seen such extravagance before, he reckoned America was worth a shot. When his eight-year-old son, Guy, complained, Newman promised they were moving to a country full of hamburgers and colour televisions.

On or off-Broadway, he was committed and innovative, always looking for converts and adapting to new situations

These days, Atlanta United average more than 50,000 for home games, are managed by Tata Martino, formerly of Barcelona, and in Josef Martinez, possess a striker seemingly destined for a European powerhouse some day soon.

In just their second season in Major League Soccer, the Georgian city has become a hotbed of the game, and standard-bearer for the sport. By contrast, when Newman fetched up there in 1967, he had to start a kids’ league just so Guy could have somewhere to play and that was only the beginning of the problems.

“You couldn’t buy a ball, you couldn’t buy any soccer equipment, there were no referees, there was nowhere to play,” Newman told Ian Plenderleith for his wonderful and definitive, Rock ’n’Roll Soccer - The Incredible Story of the North American Soccer League”.

“I got the job of making a set of goalposts, because there were no goals. Then Saturday morning came around, but somebody had ripped the goalposts down and broken them into bits. Anyway, we hammered in two goals in the end without a crossbar, but that was the start of my exploits in seeing what had to be done.”

He preached the gospel all over America, from South Florida to San Diego, Kansas City to Dallas. On or off-Broadway, he was committed and innovative, always looking for converts and adapting to new situations.

During a labour dispute, he turned out for the Strikers at the age of 44 (alongside his son) and when his players with the San Diego Sockers complained of burning their legs sliding on the harsh indoor surfaces, he put Olive to work buying women’s girdles and turning them into protective leggings. The Sockers won 10 national titles in 11 seasons.

Three decades after togging out for his Atlanta Chiefs’ debut, he was the first manager appointed by an MLS team before the inaugural 1996 season. In between, he’d seen clubs and leagues fold, witnessed 77,000 fill Giants’ Stadium to watch Pele’s New York Cosmos thrash his Strikers, and crossed swords with some of the greatest ever to play the game.

See, long after George Best had degenerated into full-blown Georgie, Newman, like so many other well-intentioned fools, figured he might be the one to arrest the decline and pull off the great reclamation project. A good plan except nights on the skite were still the Irishman’s favourite pastime, a hobby that will catch up with you in the sapping Florida heat.

When Best was struggling in one match, barely able to run 10 yards and lashing out at fitter opponents stealing the ball from him, Newman decided to take him off before he was red-carded.

As he stomped towards the line, a fuming Best started to remove his jersey. Sensing what was coming, Newman moved towards him, better to catch the garment when it was flung in his face. Afterwards, the press tried to make a meal of the incident. Fearing losing him to a suspension, the manager was having none of it.

“George Best gave me his shirt,” he deadpanned. “I’m no different to any of the other soccer people in the world. Everyone wants one of his shirts.”

What else did they expect him to say?

1 Frustration for Lowry and McIlroy as Li leads at US PGA
2 Michael Walker: Pressure mounts on Barcelona to stop slide
3 Sene Naoupu turning mind back to rugby after health scare
4 Rubber about to meet the road as counties weigh up financial hit
5 Billy Vunipola fears Saracens demotion will hinder Lions hopes
Real news has value SUBSCRIBE
Crossword Get access to over 6,000 interactive crosswords