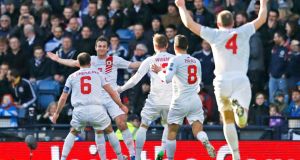 Mercifully, there are two people who can look back on this fixture with fondness. Lee Casciaro, a policeman who plays part-time football for Lincoln Red Imps, scored Gibraltar’s maiden goal since their admission by Uefa into qualifying processes such as this.

Later, Steven Fletcher was to make his own little piece of history by becoming the first Scotland player in 46 years to claim an international hat-trick. Thankfully for Fletcher, the standing of such records does not depend on the quality of the opposition. Here, Gibraltar did little to prove their worth. From five Group D matches, this tiny territory has now shipped 27 goals in proving the epitome of cannon fodder.

Gordon Strachan knew he was on a hiding to nothing on a cold, wet, windy and uninspiring Hampden Park afternoon. More meaningful stuff is ahead, namely the Scots’ visit to Dublin for a clash with the Republic of Ireland in early June. If it seems somehow churlish to write off a 6-1 success, there really was little to learn or gain from this event. Other than, that is, the three points which Scotland earned from the win.

“All the credit should go to Gibraltar,” said a deliberately magnanimous Strachan afterwards. “They made my life a misery for periods of the game, they made it long for me as a coach. So well done to them but also well done to our players; some of them were having a poor game but they stuck at it. We can go into the second half of this group feeling quite good about ourselves.”

Strachan arguably over-thought this encounter, which is perhaps the consequence of an international coach with too much time on his hands. Rather than stick with a formation which has proved generally successful during his tenure and rely on the talent therein, Scotland’s manager made the curious decision to revert to 3-5-2. The three included two full backs, Alan Hutton and Andrew Robertson, who are about as orthodox in that wide position as can be found in British football. Playing so centrally looked alien to them, which was hardly a shock.

The upshot, added to the number of attacking players in the home team, was ragged and cluttered stuff in the early stages of the game.

“We spent all week on attacking and width and fell asleep, taking it for granted that they wouldn’t attack. And they did,” Strachan explained. “We expected the system to work a lot better than that. In the first 10 minutes we gave the ball away eight or nine times, which is far too much for international level.”

Still, the hosts were in front before Casciaro’s intervention, Gibraltar’s goalkeeper Jamie Robba needlessly bundling Shaun Maloney over when the ball was running out of play. Maloney himself stepped up then lashed home from 12 yards.

Casciaro then stunned Hampden. With the Scottish defence missing, the 33-year-old latched on to a pass from Aaron Payas – a lawyer – before slotting the ball through David Marshall’s legs.

“Allan McGregor and Craig Gordon [/Scotland’s back-up goalkeepers/] think I am the best manager in the world now,” said Strachan with a smile. “They won’t be the one in the quiz question years from now.”

Davie Wilson, Gibraltar’s manager, admitted to “tear-jerking” emotions given he comes from Glasgow. “We had a period in the game where we achieved our aim,” Wilson added. “We came here to score a goal and not show that we just sit on our 18-yard line. It was one of those, ‘it will never last’ feelings but I was loving it.

“We are gaining professionalism with every game. If we do something better every time than the last game then we are making progress. We are gaining momentum.”

It took 10 long minutes for Scotland to edge back in front. Fletcher headed past Robba after Gibraltar failed to clear a corner. Another penalty triggered the third, Maloney again converting after Steven Naismith had been fouled.

Naismith claimed the fourth before half-time, thereby ending any possible and fanciful debate about the match outcome, after build-up work from Ikechi Anya. Sensibly, Strachan introduced an extra centre back at half-time.

A tedious second period was brought to life by Fletcher, who had come into this game without an international goal in six years. He headed home a Jordan Rhodes cross, thereby raising the possibility of a rare Scottish hat-trick, before a cute finish in the final minute of regulation time sealed precisely that.

“I was actually here in 1969 when Colin Stein scored four [/against Cyprus/],” Strachan revealed. “It was a good few years, and a good few stone, ago.”

Fletcher’s Scotland record has suddenly improved markedly, to four goals in 20 appearances. Whether or not he can build on that when the serious stuff restarts is probably going to be a key factor in Strachan’s aspirations for his team. When Scotland meet Gibraltar again, in the final match of Group D, Strachan hopes another success will be the precursor to qualification.

Chiefs survive loss of Mahomes as Brady wins battle of the veterans 12:04
Bríd Stack released from hospital with no spinal damage 11:46
The Offload: Ronan O’Gara more than willing to take a punt on Jack Crowley 10:00
Spirited finish allows Kevin Na to win Sony Open 09:09
All in the Game: Glowing tributes few and far between as Özil’s Arsenal exit nears 09:00