Manchester City blow Watford away as they score six at Wembley 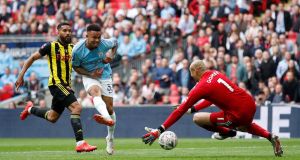 City battered Watford 6-0 to lift the FA Cup at Wembley, completing an unprecedented trio of trophies in ruthless style.

Guardiola had targeted a quadruple, but City were dumped out of the Champions League quarter-finals by Tottenham.

But with the FA Cup in the bag alongside the Premier League and Carabao Cup, boss Guardiola believes City’s consistency in winning a record 50 matches in a single season carries more weight than had they conquered Europe.

“To be the first to win the treble means that if one team is able to do that another team will repeat it sooner or later. But we were the first, and that means consistency every day for 10 months.

Raheem Sterling bagged a brace as City ran Watford ragged, with the England forward denied a hat-trick with his side’s second goal credited to Gabriel Jesus on review.

Jesus struck twice then, with David Silva and Kevin De Bruyne also on target as Watford were simply blown away.

Sterling grew up in Wembley’s shadow, watching the new stadium be constructed while dreaming of one day gracing the hallowed turf.

Where once Sterling the youngster was on the outside looking in, the 24-year-old was Saturday’s centre of attention.

Guardiola hailed Sterling for maturing rapidly this season, as much off the field as on, speaking out against racism in sport and gaining widespread respect in the process.

“He’s grown up as a man, that happens; he’s a father, he’s definitely grown up,” said Guardiola.

“And that’s good, that’s a good sign. Raheem has had an incredible season. One reason why we are here is Raheem.

“We don’t have to forget what we’ve done this season, but at the same time we have to start again next season knowing we can do better.

“So I want to say thank you so much to everybody for this incredible commitment.

Guardiola insisted Sterling would not be upset to miss out on a hat-trick, and also downplayed the margin of City’s victory.

“Honestly it doesn’t mean too much, whether one player scores three or one; it doesn’t matter,” said Guardiola.

“And it was just important to win the title, the number of goals was not important.”

Watford boss Javi Gracia vowed the Hornets will come back stronger from their Wembley humbling, thanking supporters for offering him a constantly warm reception.

Asked how he felt when Watford fans waved flags in their thousands in solidarity at the game’s death, Gracia said: “It’s difficult; it’s difficult for me to explain with words my feeling in that moment.

“I’m very proud to be a part of this club and the supporters we have.

“Sometimes you have to lose these games to do it better in the future. So I think it’s good for us.

“It’s a good experience, I know in this moment it’s hard for all the Watford supporters, but we have to look at the future.

“We are not satisfied with this defeat, but I think it will be good for the future.

“It’s a step forward for us to live this experience.

“And I’m sure we’ll have more options in the future, not only in the FA Cup, the Premier League as well, we want to improve and do better next season.”