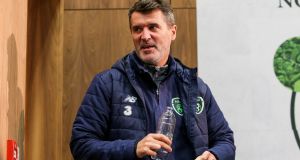 Roy Keane: For a man who has been so consistently scathing of the FAI, he has worn a lot of their track suits. Photograph: Gary Carr/Inpho

Who is Roy Keane now?

Years ago, when the State was younger and, across the water, the Observer used to publish thrillingly lavish monthly sports magazines, Sean O’Hagan took a break from writing terrific music essays to spend a few hours chatting to Cork’s second most celebrated son. (Number one spot will always be JBM).

This was a few months after Saipan and it was difficult to find any reference about Keane without the word ‘brooding’ lurking nearby. When they met, it quickly became apparent that Keane assumed the publication would have reserved a room in which they could shoot the breeze while O’Hagan figured that the footballer’s agent would have taken care of that little detail.

He half expected to witness an up close and personal display of the infamously quick temper and lacerating tongue. Instead, he watched as Keane “charmed” whoever was at reception into finding them somewhere and proceeded to chat easily and good-humouredly as arrangements were made.

Keane was still Manchester United’s engine and conscience at that time and one of the biggest individual draws in stadiums all over England; the jewel in Alex Ferguson’s crown and a notoriously independent figure.

It is highly likely the Roy Keane of that day could never have pictured himself where he finds himself this week: assistant Irish coach (you have to imagine the very term ‘assistant’ would have caused Keane to baulk) but also acting as the Republic of Ireland’s gags man – a soother of nerves – in a campaign that has become desperately tense and frayed with every passing game.

Ireland’s Group D qualifying campaign seems to have been going on since about autumn 1978. In fact, it is less than a year since James McClean’s 48th minute strike in Vienna briefly left Martin O’Neill holding all the aces.

Something turned in Ireland’s campaign on the dark night in late March when Neil Taylor smashed into Séamus Coleman with an ill-judged tackle that broke the Irish captain’s leg.

The 0-0 result and a sour taste that evening; an 85th minute reprieve by Jonathan Walters to rescue a 1-1 draw against the supposedly hapless Austrians in Dublin; a dismal performance and another 1-1 in Tbilisi all led to the all-effort-and-zero-guile 0-1 loss against Serbia last month.

Through those games, Martin O’Neill cut an increasingly pensive and rattled figure as the odds on Ireland getting to Russia lengthened. Confidence dipped and the injury list, headed by the recuperating Coleman, grew as Ireland headed into Friday night’s encounter against Moldova in a deeply uncertain run of form.

Each disappointment deepened the suspicion that Ireland had blown a golden opportunity to actually comfortably qualify for a major tournament rather than the usual dive-through-the-door-as-the-train-leaves-the platform.

And at the heart of that struggle to perform lies the debate as to whether the problem lies with the indomitable ordinariness of the players or with O’Neill’s innate caution and unwillingness to allow his players the freedom to have a go.

Where Keane stands on this debate is a mystery. Through it all, he has acted as a kind of sharp and witty consigliere to O’Neill. He still delights in the role of provocateur, this week goading Everton and Ronald Koeman in the ongoing spat over the fitness of James McCarthy and placing the blame at the feet of the of Goodison “scientists”.

And yes, he still has the deadpan stare just so and carries a hint of warning in his voice when fielding media questions that he regards as contrary. But for all that, Keane has learned that life involves compromise.

It was all there when he was asked by Damien Spellman of PA whether coaching Scott Hogan, the young Villa player who admitted to being star-struck after meeting Keane, made him feel old. “Yeah, it does, yeah,” he said vigorously and the tough guy persona gave way to the sardonic grin because he knew it was the truth.

The weird thing about Keane is that even though we fretted about losing him in those years when he was Ireland’s indisputable contribution to the stable of world-class footballers, he has been in and about Ireland camps for most of his life.

There he is loafing in the shadows of the Charlton era like one of John Osborne’s angry young men, there he is clattering Marc Overmars with a tackle that seemed to put a full stop of Dutch football as a force, then raging against Mick McCarthy in Saipan, leaving, dividing the country, coming back under Brian Kerr, retiring and finally reappearing in his current guise; the post-player, wiser, sometimes extravagantly bearded, switching between tetchy and amused without skipping a heartbeat.

The waspish asides are a headline writer’s delight and by all accounts the players love having him about the camp and he has settled into this role, becoming part of the furniture.

For a man who has been so consistently scathing of the FAI, he has worn a lot of their track suits. Thursday’s announcement that the FAI and Martin O’Neill are ready to sign terms for another two years means Keane too will continue in this supporting role, for better or worse.

At the peak of his athletic powers, Keane used to rebel against what he perceived as Ireland’s contentment – both team and country – with merely making it to the party. Just Being There never sat well with him. He wanted Ireland to be its best: to play above themselves, to be the best they could be. And he was so right.

There has been a sense, through this long, long campaign, that the public has caught up with this sentiment. Eking out those gruelling 1-0s or 1-1s by hook or by crook just doesn’t cut it as entertainment any more.

There are countless lifelong Ireland fans who will tell you their passion for if not interest in the team is waning because of the brand of football; that they would rather see the players express themselves, have a go and be creative.

For years now, the inclusion or exclusion of Wes Hoolahan in the starting line -up as been used as an arbiter of the manager’s creative impulse. But it runs deeper than that. It’s just as well Ireland’s football fans have a flair for going amicably bananas at major football tournaments. Their antics provide a welcome distraction from the greyness of the team they support. Almost for the first time, getting the results is not enough.

And lately, Ireland haven’t even been getting the results. Assuming the team avoided calamity against Moldova, this endless campaign comes down to Monday night’s smash-and-grab mission in Wales. It’s the classic scenario for Ireland: a big night, against all odds.

O’Neill has the backing of John Delaney and has a knack for scraping out of tight situations and is ever the brightest boy in class. So who knows?

Maybe he will be smiling after the dust has settled and extolling the virtues of never quitting, of never giving up. And they never do, those players. They wear their hearts on their sleeves.

But maybe they can do a bit more, too. And if they do somehow qualify and resurrect a grim year, will O’Neill and Keane then be brave enough to shape and guide their team into playing above themselves?