US president Donald Trump says NFL owners "should do something" about the players who are taking a knee during the national anthem before games, saying "it's very disrepectful to our country." Video: NFL/Reuters 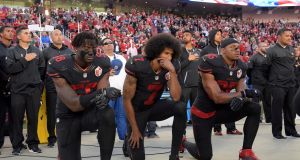 San Francisco 49ers outside linebacker Eli Harold (58), quarterback Colin Kaepernick (7) and free safety Eric Reid (35) kneel in protest during the playing of the national anthem before a NFL game against the Arizona Cardinals in Santa Clara, California, in October 2016. Photograph: Kirby Lee

When the crowd arrives, you know the best of it is already over. So it was with the cast of NFL owners who endorsed Colin Kaepernick’s singular protest by going down on one knee throughout the national anthem ritual across the American Football League last weekend.

It took US president Donald Trump’s latest roll-your-eyes-heavenwards outbreak of nuttiness to force the moment. The Donald declared that NFL players who knelt during the anthem should be axed. “Get that son of a bitch off the field,” he thundered, slipping into fantasy NFL owner mode. “You’re fired. You’re fired!”

It was enough to convince the NFL scions to tug the trouser leg of their bespoke Westmancott and take a knee with their players. The crucial difference between the demonstration of unity by the owners and players last weekend and Kaepernick, who last season knelt all by himself, is that they will all play and get paid this weekend while the former San Francisco 49ers star is out of a job. Kaepernick is, right now, a former NFL player.

As a show of unity, the NFL moment of solidarity garnered all the attention and played out as a memorable symbol of sport’s united front against the latest assault from the White House on free speech and what have you. But it was a gesture. It cheapened the audacity and integrity – and point – of Kaepernick’s season-long stance, and risks obscuring what has become the most clear-eyed civil rights position taken by any athlete since Muhammad Ali decided that he would not be drafted for the Vietnam War.

Seven of the NFL’s 32 owners directly or otherwise donated one million plus to Trump’s presidential campaign, including Jerry Jones, the owner of the Dallas Cowboys – “America’s Team”. As recently as August, Jones was critical of the idea of player protests by kneeling during the American anthem flag. Nonetheless he was among the owners who did just that last weekend.

Earlier this week, he chipped in on the debate as to why Kaepernick is no longer in the NFL. Having invoked his free agency with the struggling 49ers last March, Kaepernick has not been offered a contract by any other team.

The most obvious reason for this is that Kaepernick has been marginalised because of his actions. Jones was among those to offer the opinion that his lack of a contract is simply down to what owners and coaches believe he can – or more relevantly can’t – offer on the football field.

You can dive into innumerable Google rabbit-holes to find statistical-laden arguments supporting both the player’s strengths and weaknesses. There is no question that Kaepernick’s star has dimmed since his outrageous 2012 season when, as a replacement starter, he took Jim Harbaugh’s 49ers all the way to the Super Bowl, shooting down Tom Brady and the Patriots in the process. He was no longer a starting quarterback when he began his kneeling protests at the beginning of the 2016 season and it was three games before anyone even noticed he was doing it.

His protest was specifically against the spate of police shootings of black people. “I am not going to stand up to show pride in a flag for a country that oppresses black people and people of colour. There are bodies on the street and people getting paid leave and getting away with murder,” he told Steve Wyche, the nfl.com reporter who approached the player to ask him why he was kneeling.

And then things exploded. Kaepernick’s kneeling drew both torrents of support and criticism and he returned to a starting position in a team that was ailing badly, throwing just under 60 per cent in a team that went 2-14 and hadn’t made the playoffs since 2103. But only eight quarterbacks have started in a Super Bowl since 2012 and Kaepernick is one of those – he is a seasoned, proven quarterback in a brutally tough and demanding league.

It remains to be seen whether his life as a professional athlete is merely suspended or over. The longer he spends adrift, the more unlikely it seems he will pick up a contract. And the more admirable his stance becomes.

Kaepernick’s ascension to that rarefied room was not straightforward. A mixed race child adopted by a white family, he excelled at football and baseball as a teenager but was still regarded as an outside bet by college recruiters and accepted the one scholarship he was offered in Nevada, where he began to exceed all expectations.

He sat among the Everyman rankings in his draft year and came to public attention when he was elevated to the starting role by Harbaugh in 2012. During his years in San Francisco, he began to explore and question issues of race and identity.

In an interview from 2015, he remembered that no matter how closely he stood beside his family in the foyers of motels on holidays, it was only a matter of time before a staff member sidled up to ask: “Excuse me, is there something I can help you with.”

He began to take classes at Berkeley and struck up a friendship with Ameer Hasan Loggins, a doctoral candidate there. In a Guardian essay this week, Loggins pointed out that Kaepernick’s decision to kneel was specific in its reason. “He wanted to talk about black lives being crushed by law enforcement.”

There is no doubt that Kaepernick knew he was risking it all when he first knelt down. “If they take my football away, my endorsements from me, I know that I stood up for what is right,” he said during the season.

The sabotaging of that gesture by the NFL establishment has made it seem like a generalised, blunt critique of Trump: more material for John Oliver and the other satirists who struggle to put a twist on the daily outrages of the straightforward news bulletins.

Meantime, Kaepernick is out of a job and he continues to donate $100,000 per month four ways to innumerable on-the-ground charities for the marginalised and victimised. It is part of his million dollar pledge: 100k a month for 10 months.He has declined all recent requests for interviews because he is no longer in an NFL uniform. Because the television cameras are no longer pointing at Kaepernick the player, his absence is the main reminder of what he stood for. But the NFL is the great winter orgy of phenomenal athleticism, legitimised violence and ear-muffs. It’s the rites of passage that makes the life more tolerable in the frozen states.

The season will produce sufficient moments of brilliance and controversy to distract from whether Kaepernick should or should not be part of the NFL cast this year.

None of that should detract from the courage and vision of Kaepernick’s position. It isn’t hard to imagine that he would, this weekend, still be sitting on a plum NFL contract if he’d just kept quiet and been a good soldier. Had that happened, then the NFL’s big gesture would never have materialised. Dr Harry Edwards is already pushing for a Nobel Peace Prize nomination for Kaerpernick, predicting that in 20 or 30 years, the magnitude of Kaepernick’s intervention will be truly understood.

In the meantime, in light of last weekend’s big gesture, Sports Illustrated’s latest cover features a montage of stars and faces from across American sports who have taken a stand against various social and political injustices, including kneeling through anthems.

Colin Kaepernick is nowhere to be seen.