Sideline Cut: Galway the latest county to rise to the challenge Kilkenny set 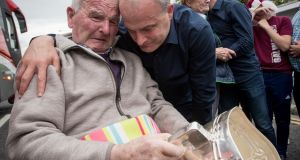 One of the most unexpected developments in modern hurling has been the emergence, out of the marble, of a cast of ex-Kilkenny hurlers as firebrand opinion-makers and downright entertainers.

A friend who lives abroad phoned the other day, amazed by the candour of the pre-publication extracts of Jackie Tyrrell’s memoir. He grew up nowhere near hurling’s perpetual Berlin Wall – the Tipp-Kilkenny border – and so has no vested interest in the rivalry but was still stunned by the provocation of Tyrrell’s depiction of Tipp circa 2012 as “shaping and hiding behind their bullshit”.

Tyrrell is equally unflinching in laying out his own motivations and willingness to indulge in the grimmer side of defensive chicanery in those years. Assigned by Brian Cody to shadow Lar Corbett in 2011, Tipp’s rangy and coltish goal machine, Tyrrell took to the task with glee, standing on his opponent’s toes, kicking at his heels, trying to pull down his socks, which Corbett always wore stretched to knee-level.

“At one stage when he tried to dart away from me, I caught his helmet. My fingers edged through the bars on his faceguard and I scraped him below the eye with my fingernails. I’m not sure if I drew blood but when Lar started complaining to the referee I just shrugged my shoulders.”

Tyrrell will later acknowledge that the Tipp team four years later had learned how to stand up to the physical rigours of the Kilkenny collective. He would have known that the above passage cannot reflect well on him. The subtitle of the book he has co-written with Christy O’Connor is A Warrior’s Code. But eye-scraping is not warrior-like.

On the phone, the friend wondered why he would choose to publicise that small, inglorious detail. As it happened, even as we spoke, there came through the open window the sound of The West’s Awake being sung in the yard of a nearby school. Several of the new All-Ireland champion hurlers had arrived with the Liam MacCarthy cup. There it was, glinting through a dull light of a midweek morning for anyone passing by to see.

It was the most vivid example of the fact that, just like the Sam Maguire, the Liam MacCarthy Cup is as magical as anything to be found on the pages of Tolkien. Both of those big silver cups have had, for over a century, a disproportionate hold on the Irish imagination. Counties – players and supporters – want to have the cup just to have the cup.

Last Sunday, David Burke raised it in front of the crowd in Croke Park: it seemed like most of the 82,000 were still there. As it happened, I was sitting not far from Conor Hayes, the last Galway man to lift the same cup in Croke Park. Hayes applauded and seemed relieved as well as delighted. It was a cool moment.

After the big celebratory homecomings in Ballinasloe and Salthill, having the cup is about the localised privilege of bringing it around the place and letting people enjoy it. Tyrrell’s book lays out the fierce and sometimes brutal application of the physical and mental energies that went into the winning of that cup as often as Kilkenny did. Nine All-Ireland titles is at once a brilliant and ridiculous accomplishment for any one hurler. It’s hard to imagine it being repeated.

The trade-off for counties like Galway, a gold-carat hurling land which has won just five titles ever, is that the outpouring of emotion and pride is beyond adequate description.

There’s a reason so many of the players declare it to be “unbelievable”. Maybe Morgan Treacy’s marvellous photograph of Mícheál Donoghue leaning over his father as he held the cup came closest to explaining it. There’s just something beatific about achieving what had come to seem almost impossible.

Winning the All-Ireland means different things to different counties. For Kilkenny, fierce and unrelenting as Cody’s best teams were, the joy was the quiet and internalised glow of another successful harvest. On one of those September Sundays when the Cats seemed to be incapable of not winning the MacCarthy Cup, a few of us were sitting in the upper Hogan.

It wasn’t all that long after the final whistle but the Cats were so well-versed in the victory ceremony by this stage that it was over in no time. Before the vanquished opposition had even left their dressing room, the speech had been made, the Kilkenny crowd were already racing back to the Marble City and golden streamers lay scattered across the grass. There were a few people on the pitch. Brian Cody, the victorious Kilkenny manager, cut an unmistakable figure as he loped towards the tunnel under a peaked cap and big sky.

A short distance behind him walked Rackard Cody, the long-serving Kilkenny kit-man, carrying the Liam MacCarthy unceremoniously by his side. Neither man was paying much attention to the object of victory. The way Rackard held the cup was striking in its familiarity. A friend sitting beside me said that “it’s like watching a husband dutifully carrying the shopping home for his wife”.

Those were the years when the hurling fraternity despaired of ever breaking the Kilkenny stranglehold. Since then, so many of black and amber serial winners retired. When Eddie Brennan emerged on the Sunday Game as a persuasive and fair analyst, one of the most striking aspects was his willingness to call the performances of his own county with a detached eye. Others have followed suit.

Henry Shefflin, Brian Hogan and JJ Delaney have all returned to speak with a freedom and license in which they simply couldn’t indulge during their black and amber years.

More extraordinarily has been the reinvention of Tommy Walsh, the exemplar of a let-your-hurling-do-your-talking player as a high-octane radio-man with a flair for colour. There’s an irony in the public getting to know these hurlers after they finish up in the game. But it’s better than nothing.

Brian Cody turned up to launch Jackie Tyrrell’s book this week and when interviewed by KCLR, he unsurprisingly said that no, he hadn’t read it and hadn’t even seen the extracts. He must have known days like this would come. For years, rumours of the lawlessness of Kilkenny’s in-house matches travelled the country.

The details are laid out in Tyrrell’s book in a chapter entitled ‘Savagery’.

The vicious exchanges between friends and team-mates informed the steel and ravenous ambition through which they dominated the game for over a decade. There is and was, of course, so much more to Kilkenny: the mesmerising stick-work, the brilliant games, the terrific hurlers who came and went without, it seemed, ever uttering a word and the constant vigilance of Cody.

They changed the game and forced the contenders to get better. And it took time but all have responded. Clare won an All-Ireland. Cork are rising. Tipp have won two. And now Galway have the year they long waited for.

Right now, in fact, Galway have everything Kilkenny want. And they also have the wherewithal to leave a maroon stamp on the coming years if they can retain the controlled fury which informed their brilliant summer. Only they know what went into the winning of that cup. Keeping it is the next trick.

In Kilkenny, there has been no word yet as to whether Cody will be back. Next year will feature so many persuasive candidates that it surely demands a 20th season of the tall man on the sideline. His return alone would be a signal that just because the stories are out there now, nothing has passed.