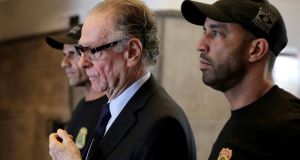 The head of Brazil’s Olympic Committee was detained on Thursday as part of an investigation into allegations that bribes helped secure the selection of Rio de Janeiro as the host of the 2016 Summer Olympics.

Carlos Arthur Nuzman, the head of the committee, was accused of failing to declare assets held abroad, including 16 bars of gold stashed in Switzerland. In a statement, prosecutors said that Nuzman had disclosed those holdings only in amended tax filings submitted after investigators raided his home early last month as part of an international investigation code-named Operation Unfair Play.

Prosecutors say Nuzman’s wealth grew exponentially over the past 10 years. He has led Brazil’s Olympic Committee for more than two decades. During the search of his house in September, law enforcement officials found about $155,000 in cash and a key to a vault in Switzerland where the gold bars are stored, according to a statement that prosecutors gave the judge overseeing the case.

Police officials also detained Leonardo Gryner, who was director of operations for the 2016 Rio Games. Prosecutors described him as Nuzman’s “right-hand man.” Nuzman and Gryner have not yet been formally been charged. Both have denied wrongdoing. Marcelo Bretas, the federal judge who ordered their arrest, determined that investigators had enough evidence to establish that the two men “acted directly and actively in an unlawful negotiation” to persuade International Olympic Committee members to back Brazil’s bid in 2009 to host the games in Rio de Janeiro, according to a court decision ordering their detention.

The IOC’s selection of Rio de Janeiro, a first for a South American city, was a triumphant moment for Brazil. Its bid beat proposals from Madrid, Tokyo and Chicago. The court decision includes copies of emails discussing bank transfers exchanged in late 2009 between Gryner and Papa Massata Diack of Senegal, who was then an IOC member. Diack - the son of Lamine Diack, a former head of the global governing body of track and field - has been accused by French prosecutors of money laundering and corruption.

The emails suggest that the Brazilians did not pay bribes as promptly as they had promised. Nearly two months after Rio’s selection was announced on October 2nd 2009, Gryner sent the elder Diack a message apologising for the delay in “fulfilling the last portion of our agreement.” Gryner explained that the “sponsor” for “this last portion” of the agreement “is having problems with its transfer and we are trying to help them.”

Diack seemed irritated the next month as he pressed the Brazilians to pay up. In a December 11th message sent to a Brazil Olympic Committee official, on which Nuzman and Gryner were copied, the Senegalese businessman sought assurances that the money would be wired to bank accounts in Dakar or Moscow. The signature block in the email noted that Diack was writing from room 2112 of the Ritz-Carlton hotel in Singapore.

Prosecutors also say that Sergio Cabral, the former governor of Rio de Janeiro state, played a key role in the plan to offer bribes to secure the games. He was convicted on separate bribery and money laundering charges in June and sentenced to 14 years in prison.

Authorities say the Olympics money came from Arthur Cesar de Menezes Soares Filho, a Brazilian businessman who was given a 45-year sentence in a separate corruption case. Soares is the subject of an arrest order, but his whereabouts is unknown.