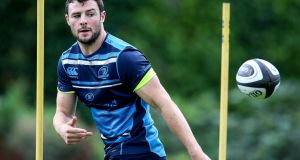 Robbie Henshaw makes his first start of the season for Leinster on Saturday. Photograph: Inpho

Robbie Henshaw returns for his first game of the season but there is no Sean O’Brien as Leinster host Munster in Saturday’s Guinness Pro14 clash at the Aviva stadium.

Henshaw has been sidelined since undergoing surgery on a pectoral muscle injury sustained while playing for the Lions in New Zealand during the summer. He was expected to return last weekend against Edinburgh but a slight niggle delayed his return by a week.

He forms a midfield partnership with Rory O’Loughlin while Barry Daly is rewarded for his excellent form with a place on the left wing. Adam Byrne is named on the right with Fergus McFadden’s versatility earning him a spot among the replacements.

O’Brien played 58-minutes against Edinburgh last week before being replaced by Max Deegan but Leinster head coach Leo Cullen has opted to re-jig his backrow with Josh van der Flier replacing Jordi Murphy and Jack Conan named at number eight. Rhys Ruddock retains his place at blindside flanker. Cullen has made six changes with James Tracy starting at hooker and Sean Cronin on the bench.

Cullen says that he had some tough selection decisions to make; “Everyone wants to play in this game so we had some tough choices and tough conversations with guys. It’s difficult for us as coaches. It’s a tough part of the job and you’d like to pick more than the 23 in the squad but we can’t. There’s some disappointed players this week.

“It’s a huge fixture. For us as club it is a big fixture and we’ve a fantastic support turning out which is great to see. To have that level of support coming out to back the team is an amazing achievement really. Everyone here has been pushing the game and it’s important we’re delivering for that level of support.”

As for O’Brien’s omission; “He got a stamp on his calf last week and went to run this week but just still has a bit of wariness there and wasn’t happy so he wasn’t considered.

“There’s good balance in the backrowers we have starting and there’s some good matchups there. Rhys and Peter O’Mahony, Josh against Tommy O’Donnell and Jack against CJ Stander. Even Jordi and Jack O’Donoghue on the bench as well. Both teams are very well stocked in that area.”

Munster’s director of rugby Rassie Erasmus has kept faith with the same pack that helped the province to victory over the Cardiff Blues last weekend. CJ Stander will make his 100th appearance for the province against Leinster.

The backline contains four personnel changes and a positional switch. JJ Hanrahan is named at fullback with Andrew Conway switching to the wing. There is a new midfield pairing with Tyler Bleyendaal moving from a more traditional role of outhalf to inside centre, alongside Chris Farrell.

Keith Earls will play his first game of the season on Munster’s left wing, while last week’s halfbacks Conor Murray and man-of-the-match Ian Keatley have been retained. Alex Wootton, outstanding for the province this season, is named among the replacements, so Rory Scannell and former Leinster underage player Mark Flanagan. Simon Zebo doesn’t make the matchday 23.

1 No further players to be called up to Ireland squad to face Georgia
2 Kevin McStay: Maybe a knockout All-Ireland Championship is the long-term solution?
3 Gerry Thornley: Ireland don’t want to box themselves into a corner
4 Former France and Stade Francais winger Dominici has died aged 48
5 Thomas Galligan and Cavan raring to meet Dublin in Croke Park
Real news has value SUBSCRIBE