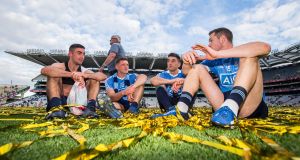 Fifteen years ago, when there was heady talk of using the River Liffey to split Dublin into two North and South Dublin fortresses, among the voices expressing concern and outrage came a thoughtful observation by Tommy Lyons, who had the head-wrecking task of managing the Dubs at the time.

“The country by and large loves Dublin to be there or thereabouts but don’t want them winning anything. They like to keep them in isolation and that is what’s happened. That’s our tribal warfare and that’s what keeps the association thriving.”

He hit the nail on the head. In 2002, everyone agreed that the Dubs were indeed ‘box office’; guaranteed to pack Croke Park in the dog days of August and illuminating Dorset St with a blustery localised expectation. To national delight, they could usually be relied upon to crash and burn at some stage, allowing their flintier brethren from down the country to do the actual winning and speechifying.

In 2002, Dublin had been All-Ireland champions just once since Kevin Heffernan’s swansong All-Ireland of 1983. The main point of the review committee was to make the capital’s burgeoning population more manageable for the GAA; the thinking was that handling a million-plus people was simply too many sandwiches for any one county board to make.

Using the dirty old river as a clean divide, it was possible to dream up a scenario in which there were two city teams.

“People must remember that even if Dublin is split it will still be the two biggest counties in terms of its population” said Peter Quinn, chair of the review.

Diarmuid Connolly was 15-years-old when that review came out. James McCarthy was 12. Neither teenager could have had much of a living memory reference to the notion of Dublin winning All-Irelands. The GAA and government rush to fund Dublin GAA had already begun. But you have to assume that by then, hundreds of volunteer coaching hours had already gone into the training of both Connolly and McCarthy and their peers.

In 2002, Connolly’s club, St Vincent’s, was locked in a time-trap. The club hadn’t won a Dublin senior title since 1984. Whatever money was going into the development and future welfare of Dublin football didn’t really matter to whoever it was in Vincent’s that worked with the ten-year-old Connolly on developing the unblemished kicking technique that featured in Sunday’s final.

And it is well documented that Paddy Christie, who was Dublin’s full back in 2002, saw that nothing was happening to bring kids through in Ballymun so he took it on himself to organise underage training. Among the players that wandered along were Dean Rock, Philly McMahon and James McCarthy. It’s impossible to prove this, but there is a decent argument to be made that if those three players – just those three – decided Gaelic football wasn’t for them, then Dublin would not have won any of its recent All-Irelands.

In 2002, Dublin beat Donegal in the All-Ireland quarter-final after a replay. There was a sense that the Dubs were going somewhere; that they were a coming force. But then they went and fell apart against Joe Kernan’s fabulous Armagh side in the All-Ireland semi-final. That game was a vivid manifestation of the point that Lyons had made in January. Armagh had come along and made a bonfire of Dublin vanities and around the country, everybody loved it.

The Dubs were like this lavish theatre, providing the stadium, the pubs, the shady car-parking arrangements and the Greek chorus on the Hill. But when the pressure came, they cracked up.

They looked scared of Armagh; scared of their muscles and scared of their ambition. Armagh won and that segued into the Tyrone-Armagh era and in the subsequent years, the Dublin North and South idea was quietly shelved as a succession of counties delighted in giving the city boys from both sides of the river their comeuppance. And the country was just fine with this arrangement.

It could go on forever.

They can’t really say this in Kerry but deep down, there must be a feeling in the Kingdom that they let the genie out of the bottle in that All-Ireland final of 2011. Dublin’s enormous potential as an All-Ireland serial winner was there for everyone to see. But the more they failed, the more defined their role as glamorous losers seemed to be. Kerry didn’t close out that game and the Dubs caught them with a late brilliant rush through the gates and since then, everything has changed.

The dominance of Dublin under Jim Gavin has led to a nationwide conclusion that the beast has finally been stirred. The population and heavy financial backing and corporate appeal have led to the mathematical equation of limitless All-Irelands in their future.

But that possible future diminishes the achievement of this year’s team. Also, there is a nagging sense that if you take out just a handful of people from the Dublin GAA scene just now – Jim Gavin, Pat Gilroy, John Costello, Stephen Cluxton, McCarthy and Connolly – they simply won’t be replaced.

It could well be that Dublin will go on to complete a five-in-a-row. And it stands to reason that if such a densely populated county improves its city coaching structure so that the best 30 kids every year are identified and given the best training and funnelled through so that two or maybe three progress to the Dublin senior squad, then they should be a perpetual force; should quickly catch Kerry’s all-time horde of All-Irelands and realise their potential as the most dominant team in the country.

The fear that the GAA has created something beyond its control may well be proven true. And in the future years, it could be borne out that no other county can live with the best that Dublin offer.

But right now, in 2017, this Dublin team has emerged from a culture of falling short to national delight. They have turned it around. There are nameless people all over the city who will believe that the unpaid hours they gave to Cian O’Sullivan or to Cluxton or to Eoghan O’Gara have, in a small intangible way, contributed to this dynastic run.

So Dublin are no longer there or thereabouts. Dublin are there to stay. Nobody seems sure how to respond. Splitting the county should no more be an option in Dublin than it is for Kerry. The lure of the GAA is playing for your county, not playing for half of it.

So now, the GAA needs a strategic review to offer solutions as to how to at least keep the illusion of a national competition alive. A quick glance at the provincial and national winners scroll shows that nothing has really changed. Laois have won a single Leinster senior championship since 1945. Louth have not won in Leinster since 1957, Wexford since 1945 and Offaly since 1997.

Their fortunes have not been affected by Dublin’s surge. It was always Dublin’s world: they just didn’t know it. All that has happened in the last five years is that Dublin have gotten serious and nobody is laughing now.

1 Ireland 23 Georgia 10: How the Irish players rated
2 Sordid murder of hurling brothers still resonates in south Galway
3 Nicky English: No surprise that Limerick and Waterford in final
4 Ireland’s autumn of discontent continues with abysmal Georgia showing
5 Ireland grind their way to grisly win over Georgia
Real news has value SUBSCRIBE
Here is your handy guide to sport on television this week