The 23-year-old is happy with her body, and now has the work ethic to go with her talent 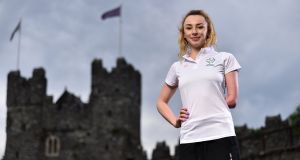 Beijing at 13, London at 17, Rio at 21. A career already in her rear-view mirror. After 10 years at the top, three World Championship bronze medals and a podium place in Rio, Ellen Keane (23) wants more.

In Beijing and London she had talent. But she was too young to fit the other pieces of the jigsaw together, and medal swims fell out of reach.

Although she won her first world medals in 2013, London 2016 highlighted that the teenager couldn’t be a “normal” teenager and win at the same time.

After London, a switch flicked and work ethic was added. She began to lead the lifestyle she needed to lead.

Since then, she says, people have come and gone. Friends have stayed. Now, she says, she better understands how all the pieces need to fall. Working hard, she tells you with a laugh, is more important than talent.

“When I started doing press-ups, I was on my knees doing one of those girly ones,” she says.

At 13 she saw her arm as a thing to conceal. She stood sideways so people wouldn’t notice her left side. She wore bulky, sleeved clothes to hide the empty space. She saw herself and her arm and its place in the world as uncomfortable, and she began to ask why.

Now she jokes about having one hand, dreams of the European Championships in Dublin in August and the Tokyo Paralympics beyond, and has positioned herself high enough in elite swimming to ask “Why not?”

She will tell you that mind shifts change lives. It can be that simple.

A year ago she gave a talk to an audience at Griffith College in Dublin. A few minutes in, she took off the jacket she had been wearing. Underneath she wore a sleeveless top revealing her left arm, amputated at birth below the elbow. She breathed deeply, hesitant. In the space of a few raw lines, she had fixed her audience.

“I was never going to have two hands despite the endless letters to Santa Claus or the Tooth Fairy,” she said. “I love who I am. I love my body and my arm is my lucky fin. Everyone has an insecurity. But that is what makes you who you are. I know it is scary but I dare you to try. I dare you to take the first step. Like I did.”

Swords Castle, and a hammering sun is curling the chicken and guacamole sandwiches at the launch of the Irish paralympic swimming and athletics teams for the European Championships.

Sitting on a bench looking over the ramparts, Keane has become more than one of Ireland’s elite Paralympic swimmers.

She talks of challenge and perception and what disability means. She explains that disability is mostly about the presumptions of others.

“It’s more the presumption of people that you can’t do anything. Legally I would be disabled. Like what is a disability? It’s what society makes you.

“People in wheelchairs are only disabled because people won’t build doors big enough or don’t build ramps. That’s the only reason they are disabled. I mean walking doesn’t necessarily mean anything. So yeah, it is important to me to be known as being a person more than for having one arm.”

Her sense of mischief comes out occasionally in her best one-liners, such as the savings involved in having one arm at the nail bar. Her accidental ruining of an expensive competition swimsuit is horror hilarity. The minor indignities of having to get help to change.

There is no disputing that one hand can be a nuisance.The light, skintight swimsuit war is a recurring problem.

“That is one of the worst things ever,” she says. “At the last competition we were at, in Sheffield, we got brand new racing suits worth €400. I was putting it on and I ... oh God ...I ripped it.

“I was pulling on this [left] side. I don’t have the hand to kind of pull it up properly, so I have to yank it. By doing that, you are tempting fate.

It’s actually so tiring putting the racing suit on. You feel wrecked even before you’ve raced. I would lock off at least half an hour of my race prep to get my racing suit on. Sometimes if I’m a little bit panicked I might even put it on before my warm-up, so I don’t have to worry.”

For the past four years she has being using a prosthetic for training in the gym. Following a series of injuries to her right shoulder, which she was overworking, it was decided she needed to condition both sides of her body equally.

She went to Cappagh Hospital in Dublin and Ottobock, a specialist provider in prosthetics, and requested a device that wouldn’t break under 100kg and that would let her work out with regular weights machines.

They made her a piece that slotted into her arm. Mechanically it worked, but suction was created when she moved, and that caused irritation. “Kind of like a hickey effect at the end of my arm,” she says. “Loads of blood vessels burst.”

She went back, and they revised the prosthetic. It works now and means her press-up routines are not “girly” – not from the knees.

“I came in one day and said, ‘I need a gym prosthetic’. I was their guinea pig for a prosthetic that was going to support 100kg without breaking, falling off or [me] damaging myself.

“We train at the same level as Olympics but there are obstacles that get in our way. I could be in the gym and my [prosthetic] arm could break and that would be my gym session for the day, for the week, if I am not able to get it fixed.

“They cost about €10,000, so you can really just have one. It would probably take six months to a year to get one made again.”

She is not disabled. But the administrative machine that runs Paralympic sport measures the disabilities in centimetres. Her classifications are S9, SB8 and SM9 for sprint distances in breaststroke, backstroke, butterfly and individual medley.

The grading system based on levels of disability – with S1 the most disabled and S10 the least – is an area that causes continuous friction in Paralympic sport. Who competes in what event determines medals.

But the Aquatic Centre in Dublin is a home venue. The Irish swimmers know the marks on the pool, know their bearings – little advantages that will help on August 19th.

She says the only real lonely bit of her “weird” life is not in the pool, where she goes “to a space in her head”, but outside it. The bits between the training until bed or the next training. But, she explains, those difficult moments are the times “when it really counts”.

Her default position is satisfaction and ambition. She gets on with it and doesn’t look for hurt where there is none. She celebrates who she is, what her talent has brought. There is no room for pity or victimhood.

“People who feel that are just a little bit insecure ... they kind of blame their disability for things,” she says. “If I had two hands, I probably wouldn’t be in the situation I am today.

“So I like having one hand,” she adds with a hint of challenge in her voice. ”I can’t really imagine having two.”

And off she goes. Ellen Keane and “her favourite fin”.