‘I have another year of contract at this club, but everything is possible’ says Blues’ boss 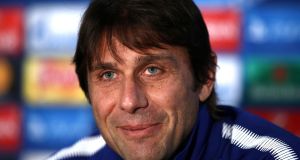 Antonio Conte: “We have started a big work here with the players and the club, and you need time to improve your work and create a solid basis.” Photograph: John Walton/PA

Antonio Conte has refused to rule out that he will leave Chelsea in the summer, saying “everything is possible” in response to speculation about his exit.

The Juventus manager, Massimiliano Allegri, has been linked with taking Conte’s position at Stamford Bridge in the event that he departs in pre-season, a year before the end of his contract. Conte stressed it would be the club’s decision, suggesting also that Chelsea’s high turnover of coaches increases the amount of scrutiny on the role.

When asked about the link with Allegri, who has been joined by Luis Enrique and the Napoli coach Maurizio Sarri on Chelsea’s list of reported targets, Conte said: “Everything is possible. I have another year of contract at this club, but everything is possible. In one moment you stay here; in another moment you are in another place and another person replaces you and your job. Football is like this. Our job is very difficult – everything can change a few times.”

Pressed on whether he would depart of his own accord, Conte explained Chelsea would have to break his contract and said the club’s history – Conte is their fifth full-time manager this decade while Rafael Benítez and Guus Hiddink have also taken interim roles – makes rumours inevitable.

“It is normal for the manager of this club to have this type of situation,” he said. “Also if you won last season the league and reached the final of the FA Cup – this is the history of this club for the manager. I have a lot of experience in dealing with this type of situation but there is something strange if after the first game, which we lost against Burnley, the press push quickly to sack me. In another club this doesn’t happen.

“I have another year of contract and in this case I think the club has to decide to send me away. We have started a big work here with the players and the club, and you need time to improve your work and create a solid basis.

“In football now it is very difficult to predict if you can stay many years with one club, especially in England. Before, managers in England were in charge for many years. Now all of a sudden you decide to sack managers earlier.”

Conte, who was speaking before Saturday’s Premier League match with Leicester City was also asked about a conversation he held with Alexis Sánchez in the tunnel at Stamford Bridge before the clubs met on Wednesday night. He is a long-term fan of the 29-year-old but said that if Manchester City wish to sign him, as looks likely, Chelsea would be powerless even in the event they were interested.

“He’s a great player and knows very well that in my first season at Juventus we tried to buy him from Udinese, but then he decided to go to Barcelona,” he said. “He knows well my admiration for him and this was a good chance to say hello to him. I have great admiration for great players and Alexis Sanchez is one of those players.

“If Manchester City want Alexis Sanchez then they buy Alexis Sánchez. They don’t have a problem about money or this investment. I think it is a good investment – we are talking about a price that is not so high. The amount is around £20m. Maybe the normal amount is £80m to £90m.”