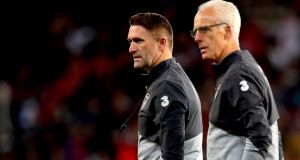 Robbie Keane was a coach for Mick McCarthy but has not been included in Stephen Kenny’s backroom team. Photo: Ryan Byrne/Inpho

Gary Owens says that the FAI is in talks with Robbie Keane about a new role in the association, but in interviews on Sunday afternoon the FAI’s Interim CEO did not sound much like a man who expects one to be found.

Asked on RTÉ Radio whether Keane, who has not been named as part of the new management teams of either the senior or under-21 Ireland teams, would continue in any role, Owens said: “We’re in discussions with Robbie and his agent about what role he might like so, no, not yet anyway.”

A little while later, on Newstalk, Owens repeated the line that talks are continuing and said that: “we will see where that goes,” before giving the impression that those discussions are at what might politely be described as a preliminary stage.

“I don’t know to be honest,” he replied when asked if Keane was anxious to stay on in some role. “We are very open to sitting down with Robbie and his agent about what role he may or may not play in the association. We are very open-minded about that.”

Pressed on what sort of role that might be, Owens suggested that: “that’s a conversation you should have with either Robbie or his agent.”

Owens said that he is now hoping that the playoff games will be at the tail-end of a heavily revamped autumn schedule. The expectation now is that there will be three games a month in September, October and November so as to accommodate six Nations League games, a friendly and, ideally, two playoff games.

The exact order is not clear yet but that schedule would, says Owens, give Kenny a little time to find his feet in the new role and the additional games, he suggests, will give the association something of a boost towards the end of what is going to be a tough year financially.

The Dubliner insists things are not as bad as some of the assessments he has seen published in the media but the postponement of Euro 2020 “will have an impact,” he admits, although “we were only assuming that we would have six games instead of nine (and) in the last three months of the year, I am hopeful that we will make up for that in terms of the impact.”

Keane, meanwhile, is understood to currently earn well short of the €250,000-a-year that has been reported, although as things stand his salary would be due to increase to something like that for the latter two years of his four-year deal. In those circumstances it is impossible to imagine any role he could take on outside of the senior squad that would not require a huge pay cut. However, cutting ties with the 39-year-old if no alternative can be found may well end up being costly for the association.

The Dubliner cannot , any more than McCarthy and his €1.1 million end of contract bonus, be blamed for taking whatever their agents secured on their behalf in negotiations with John Delaney at the end of 2018, a point at which they could not have known the trouble the association was in.

Now that it is well known, however, and the association is having to look to cut staff numbers, it would be a hugely welcome gesture for the pair to walk away from at least some of their future contractual entitlements: the bulk of the remainder of his salary in Keane’s case and any qualification bonus that might become due in McCarthy’s.

As things stand if no job can be found for Keane, and his modest enough role in the senior set up over McCarthy’s time proved to be the only return on the cost of his four year deal, it would surely go down as a particularly poor piece of business even by Delaney’s standards.

In the case of McCarthy, his salary to date along with his parting bonus means he has earned around €2.8 million during his second stint at the association, very much on a par with what Gareth Southgate would have received from the much larger English FA.

Southgate’s bonus for reach the 2018 World Cup was €280,000. McCarthy’s in relation to Euro 2020 is understood to be around €1 million although there are now suggestions that there might be an agreement that it be split with Stephen Kenny in the event that Ireland do qualify.