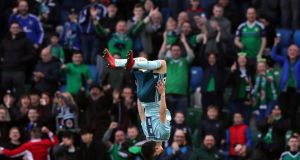 QPR winger Smyth, who played 90 minutes for the under-21s against Spain on Thursday, became the first Northern Irishman in 17 years to score on his international bow by firing home four minutes from time.

The South Koreans had gone ahead early on through Kwon Chang-hoon but the hosts levelled when an ingenious free-kick routine led to Kim Min-jae scoring an own goal, with Smyth then stepping off the bench to grab a winner and help the Northern Irish move on from their World Cup playoff heartache.

O’Neill had spoken about his optimism for the next generation at Friday’s press conference, and he started 20-year-old Jamal Lewis, making his international bow just 92 days after his maiden senior club appearance with Norwich.

Playing in a back four alongside the experienced Aaron Hughes, Jonny Evans and Gareth McAuley, it was Lewis who was caught out for the visitors’ seventh-minute opener.

He failed to track the run of Kwon who collected Park Jo-hoo’s brilliant scooped pass over the top, took a touch and beat another Northern Irish debutant Trevor Carson.

If the hosts were going to find a way to level, it looked like being via a set piece. One Oliver Norwood free-kick resulted in George Saville testing goalkeeper Kim Seung-gyu and Jamie Ward putting away the rebound, yet the offside flag went up.

O’Neill lost one of his elder statesmen when Hughes, winning his 110th cap on the eve of the 20th anniversary of his Northern Ireland debut, was forced off through injury and replaced by Conor McLaughlin.

It was the Millwall right back who then won the 21st-minute free-kick which brought Windsor Park to its feet by its inventiveness. The Northern Irish have always prided themselves on their ability to score from set pieces but without Chris Brunt and Steven Davis, there was no obvious candidate to take the 25-yard set piece.

Saville ran away from the ball and stood on the edge of the wall, which Ward ran past undetected and collected a slide pass from Norwood before delivering a low cross that Kim inadvertently turned into the top corner of his own net.

There were celebrations among the Northern Ireland coaching staff as a plan they had undoubtedly spent the week devising came together.

South Korea had looked the more likely side to grab a winner but a series of attempts were deflected wide or blocked, including one from McLaughlin 10 minutes before the end as he threw himself in front of Kim Shinwook to deny him a close-range goal.

And it was Smyth who would settle the contest with his first involvement in the South Korean half. Collecting a flick on from fellow substitute Conor Washington, the 20-year-old took one touch and fired home a convincing finish before embarking on an even more impressive athletic celebration.