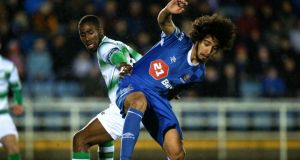 Courtney Duffus bagged a brace against 10-man Shamrock Rovers to allow Waterford leapfrog them into second place of the SSE Airtricity Premier Division at a rainy RSC on Friday night .

All three goals arrived in a frantic five-minute first-half period after Rovers had lost Ally Gilchrist early on to a red card.

First-time efforts by Duffus came either side of Graham Burke’s sixth goal of the season.

The victory was Waterford’s fourth from four games at home which, added to three points in Sligo, has them just a point off champions and leaders Cork City.

Similar to the recent wins at the RSC against St Pat’s and Waterford, Alan Reynolds’s side began on the front foot.

Gilchrist only succeeded in helping them by diving in on Dean O’Halloran to earn a yellow card. Within 60 seconds, the 3,000-strong crowd were baying for blood when he dragged down Duffus and Paul McLaughlin issued the red card.

That was only the start of the drama as Gavan Holohan soon blazed over from close range.

When the full back send his header up in the air, Duffus turned brilliantly in the box to send his low shot skidding past Tomer Chencinski.

Within two minutes, the Hoops struck back. There seemed little danger when Brandon Miele found Burke on the right but he cut inside and found the net off the far post with a sumptuous curler for his sixth goal the season.

An eventful evening continued down the other end.

Lee Grace was dispossessed by Stanley Aborah on the edge of his own box, with the ball breaking for Holohan. He looked up to pick out Duffus to stab his first-time shot through the legs of Chencinski.

Rovers created a couple of chances to snatch a point. Grace’s header two minutes into the second half forced Lawrence Vigouroux to parry the ball away while, with 19 minutes left, Dan Carr raced clear only for Garry Comeford to produce a last-ditch tackle.

Ian Bermingham led by example to get St Patrick’s Athletic back on track with the only goal of the game at Richmond Park.

Skipper Bermingham’s winner gave St Pat’s a second victory in five games to see them leapfrog both Limerick and Derry City up into the top half of the table.

With three changes from their defeat at Shamrock Rovers last week, and first starts of the season for midfielder James Doona and striker Jake Keegan, St Pat’s enjoyed plenty of the ball, but struggled to create much.

The only chance of note in a dour first half didn’t arrive until two minutes before the break.

Doona found a pocket of space to let fly from distant only to be denied by Brendan Clarke stretching to his right to push the shot away and deny his former club the lead.

St Pat’s upped the tempo on the resumption and got what proved their winner on 56 minutes.

Bermingham met Conan Byrne’s free kick from the right with a bullet header to the net for his second goal of the season.

Their tails up, St Pat’s were inches from doubling their lead eight minutes later as the impressive Brennan’s stinging drive arrowed just over the top of Clarke’s crossbar.

Doona was then guilty of a dreadful miss on 74 minutes, somehow managing to balloon the ball high over the top with the goal at his mercy.

Though both teams have struggled for goals in the opening weeks of the Premier Division season, they served up a blistering start to this contest. At the end of a third-minute attack, Bray broke the deadlock with a close-range header from winger Daniel Kelly.

While this was a shock to the system for the Gypsies, they were back on level terms within 60 seconds of falling behind. After he picked up possession 30 yards from the target, the recalled Ian Morris unleashed an unstoppable shot into Aaron Dillon’s net.

The remainder of the half was relatively tame in comparison, but Bray attacker Aaron Greene was denied by a stunning Shane Supple save prior to the half-hour mark.

Kelly was just wide of the mark after the restart, before a Paddy Kavanagh effort for Bohs floated over the Seagulls’ crossbar.

Moving into the final quarter, clear-cut opportunities were becoming few and far between. Yet, just when Bray looked set to pick up their second point of the campaign, Corcoran guided Bohs towards a morale-boosting home victory with a composed finish in the 91st minute.

1 Séamus Power rockets into share of clubhouse lead in Detroit
2 What became of Celtic’s Lisbon Lions?
3 Monica Seles: The warrior queen who could have been the best ever
4 Red Bull poised to protest over Mercedes’ new steering system
5 Billy Morton’s Santry Stadium a beacon for sporting endeavour
Real news has value SUBSCRIBE