Retirements, scandals and a 6-0 loss to Spain have followed memorable final run in Russia 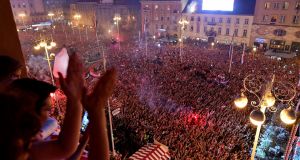 Half a million people turned up in Zagreb for the Croatia team’s homecoming following the World Cup in Russia. Photograph: Andrej Isakovic/AFP/Getty Images

Charlie was the first to go. Vedran Corluka, who goes by that nickname, announced his international retirement on August 10th via his Instagram account; that was only expected as the trusted veteran defender struggled with injuries and had lost his starting place. Within five days Mario Mandzukic and Danijel Subasic, who had both impressed at the World Cup, followed suit.

It felt like an era coming to end and almost everyone thought Luka Modric, the Golden Ball winner in Russia and Croatia’s playmaker for the past 12 years, was going to be next. There were rumours of Ivan Rakitic retiring as well.

For weeks the public was kept in the dark, dreading and guessing what the team would look like once the international competitions started again. It was only when Zlatko Dalic announced his squad for the Portugal friendly and the Spain match in the Nations League that the fears were appeased. Modric and Rakitic had decided to stay but that was not the end of it.

Nikola Kalinic, the usual alternative for Mandzukic, had been sent home during the World Cup after a conflict with the manager. He did not return to the team. Ivan Strinic, the much disputed first-choice left back, had to take a break after being diagnosed with a heart condition. Dejan Lovren, Ante Rebic and Andrej Kramaric were not fit enough, while Sime Vrsaljko had to leave the pitch after 20 minutes against Spain owing to an injury.

For Croatia’s very limited pool of quality players that was nothing short of a disaster. The depleted team were destroyed by Spain and should consider themselves lucky to concede only six. “We fell apart,” Dalic said. “We have to draw lessons from this.”

It was the worst defeat in Croatia’s history and it signalled the end of the honeymoon for Dalic and his players.

Some honeymoon it was, though. Around 500,000 people welcomed the team on the streets of Zagreb on their return from Russia and they proceeded to tour the country, each of them visiting their hometowns where parties were organised. Even Drago Cosic, the commentator for HRT, the public broadcaster, got his in Teslic, Bosnia and Herzegovina, where he hails from. “Raaakiiitiiiic,” he shouted into a microphone, just like he did for the winning penalty that took Croatia to the semi-final against England.

The nation enjoyed this illusion of grandeur, newly found through its team, and for a while appeared to put aside all the negativity and problems that have plagued its football – and not just football – for years, resulting in dwindling support. Now they were the nation’s darlings again, or so it seemed.

But underneath the surface new problems have been developing. Many people resented the invitation to Marko Perkovic Thompson, the controversial singer who is an icon of the nationalist right, to the main homecoming party. His presence divided a nation that had briefly appeared united and was the subject of heated discussion for weeks.

Then there was Dalic, who insinuated there were some in the federation who tried to sabotage or replace him; there were hints that he will not extend his contract and talk of alleged big-money offers from other nations and clubs.

Charges of perjury were raised against Lovren, stating he falsely testified in the case of Zdravko Mamic, the former leading figure in Croatian football who has fled to Bosnia to avoid a jail sentence for embezzling huge amounts of money from player transfers, including Lovren’s. The Liverpool defender has denied any wrongdoing. Charges against Modric for the same thing were later dismissed on technical grounds but could to be raised again once the Mamic trial is over.

Cosic, the TV commentator, was accused of having illegally tried to sell tickets for World Cup games. He said he had given them to friends but was fired by the HRT. Some so far unnamed people in the Croatian federation are being investigated by police after an anonymous tip claimed they took some tickets meant for players and tried to sell them. The players are being interviewed about it and last month Fifa confirmed it is “gathering all the information about the case”.

On the football front, for all the absences against Spain, Dalic’s tactics have been described as “debacle” and”fiasco” by influential media outlets. The players seem psychologically empty after the fairytale of the summer and they struggle to take the Nations League very seriously, especially after the manager stated it would be a “good preparation for the upcoming qualifiers”.

Modric is not the only one out of form. Lovren, Rebic and Kramaric return for the game against England but now Lovre Kalinic, Croatia’s new No 1, is injured. Dominik Livakovic, the Dinamo Zagreb goalkeeper who has one cap, is expected in goal instead. The game will be played behind closed doors in Rijeka’s Rujevica Stadium, because of previous crowd problems.

When Croatia met England in the World Cup semi-finals everyone in the country considered them favourites against Gareth Southgate’s inexperienced side. Croatia dreamed big and were brimming with confidence. An era did not come to an end – yet – but things have certainly changed a lot in a short period of time. - Guardian

1 Gordon D’Arcy: the next fear for Irish rugby is England in Twickenham
2 Seán Moran: Fallout from Tyrone final celebrations will concern GAA
3 David Moyes discovered positive test an hour after arriving at London Stadium
4 Pro14 teams need private planes to keep show on the road
5 How Dundalk’s opponents Sheriff started on the wrong side of the law
Real news has value SUBSCRIBE
Crossword Get access to over 6,000 interactive crosswords