Guardiola hails City’s consistency as they prepare for final push 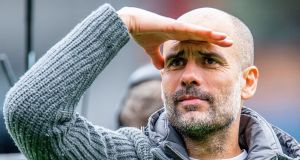 Pep Guardiola: “Of course only one will take the prize and the other one will be at home sad.” Photograph: Peter Powell/EPA

Manchester City must beat Leicester at home on Monday night to make sure they go into the final day of the season with the destiny of the Premier League title in their own hands.

Liverpool’s 3-2 win at Newcastle United on Saturday evening put Jürgen Klopp’s team two points ahead of City with Wolves due to visit Anfield on Sunday.

If City beat Leicester they will take a one-point advantage to Brighton for their final match. If Pep Guardiola’s men fail to win tonight the hope of becoming the first team since Manchester United a decade ago to retain the title would be thwarted if Liverpool take three points on Sunday.

Guardiola may be without Fernandinho for the visit of Brendan Rodgers’ side. The midfielder will undergo a fitness test on a knee injury, while Kevin De Bruyne is definitely unavailable because of a hamstring problem.

Even if City were to falter and miss out on the title, Guardiola counts the 192 points his team have so far taken since the start of last season as his proudest achievement, saying the Premier League is the “toughest” competition he has managed in.

When in charge of Barcelona, Guardiola won an unprecedented treble of La Liga, Champions League and Copa del Rey in the 2008-09 season. He then retained the league title for the following two years and claimed a second European Cup in 2011. At Bayern Munich he again won three Bundesliga titles in a row, between 2013 and 2016.

Yet asked if his points tally in England gives him the most satisfaction, Guardiola said: “Yeah, it’s the toughest league I’ve ever played as a manager, for the quality of the rivals – no doubts. That’s why being there [in contention] is incredible. But of course only one will take the prize and the other one will be at home sad.”

Reflecting on the season-long tussle between his team and Liverpool, Guardiola said City’s current position is “one of the biggest achievements”.

He added: “We have to win to give more credit to it, of course. I would not say that 100 points [of last year] was bad and that we are not satisfied. But at the same time, we were seven points behind [in late December this season]. Then, you can say: ‘It’s done – we did it last season’. But we did the opposite of that. We were like [chipping away at] a stone.”

Guardiola outlined how he gauges his team’s achievements.

“You give credit for the titles and how huge our rival is. In my career as a manager, I played against incredible sides,” he said. “There are two that were ‘wow’. One is the Barcelona of Luis Enrique’s [who won the treble in 2014-15], with Neymar, Messi and Suárez in front.

“The other is this Liverpool. I think they’re the best two sides I’ve faced. That’s why being there, with the title in our hands, fighting against them until the end [is so impressive].”

He pointed to the leadership and character throughout his squad, citing how City responded to being knocked out of the Champions League by Tottenham Hotspur on away goals by beating them in the league in their next match.

“It’s much better to have a lot of leaders than just one. They have to have it in their heads and feet,” he said.

“What they showed me against Tottenham was incredible, two and a half days later, 12.30 on Saturday, the sunshine, humidity. Then, in the next two matches, winning at Old Trafford [against Manchester United] and Burnley, where everyone thought we’d drop points.”

City, having already won the League Cup, could claim an unprecedented domestic treble should they retain the title this coming week and beat Watford in the FA Cup final on May 18th.

Guardiola has guided his team this far despite injuries to key players, including De Bruyne and Benjamin Mendy, both of whom have been unavailable for the majority of this campaign.

“Last season was incredible,” he said. “But this season we have fought against an incredible team that has everything.”