Arsenal’s draw with Brighton settles race for the top four 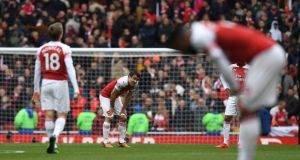 Arsenal players after their draw with Brighton at the Emirates Stadium. Photograph: EPA

Arsenal need a miracle to finish in the top four this season after stumbling to a draw in their last home league game.

Victory at Burnley next Sunday, combined with a defeat for Tottenham Hotspur and a freakish swing in goal difference, could yet save Unai Emery’s team but, realistically, their chances of reaching next season’s Champions League depend on winning this season’s Europa League. They have a 3-1 lead going into Thursday’s away leg of the semi-final in Valencia. That may not be enough if they play the way they did here.

This turned out to be the latest instalment of a race for the top four that seems more like a lobbying campaign to have the number of English clubs in the Champions League reduced.

Arsenal came into the game on the back of three domestic defeats and, despite taking an early lead through a penalty by Pierre–Emerick Aubameyang, came close to suffering a fourth, as Pascal Gross miskicked from three yards in the dying minutes when he had the goal at his mercy. Brighton had drawn level half an hour earlier after Glenn Murray converted a penalty given away in daft fashion by Granit Xhaka.

The “lap of appreciation” that Arsenal players had to perform after the final whistle to acknowledge their fans’ support through the season felt like a joke. Most supporters had left by the time the players trudged around with glum faces.

Yet Arsenal had grounds to be confident before this game. Their problems this season have tended to surface away from the Emirates, where they have overcome most visitors. Having said that, they lost their previous their domestic game here, albeit to a Crystal Palace side with a counterattacking prowess unlike anything Brighton had shown prior to this match.

But maybe this match would see the affirmation of a new Brighton? Having been liberated from the threat of relegation thanks to Cardiff City’s defeat on Saturday, perhaps Chris Hughton would free up his players to attack with gusto, convincing Seagulls’ fans that there is hope of this team becoming more enterprising next season if Hughton remains in charge? That looked a zany notion after the opening minutes here, during which Brighton’s green-clad players massed around their own box like soldiers guarding a precious asset.

Guarding it badly, too. Because Arsenal nearly took the lead within two minutes after Alexandre Lacazette demonstrated one of the skills that led to him being announced as the home club’s player of the season before kickoff, dodging between the giant trees in the visitors’ area before laying the ball back to Henrikh Mkhitaryan, whose low shot struck the inside of the post before rebounding out.

Brighton’s resistance did not last much longer. In the ninth minute Nacho Monreal went down in the corner of the box as Alireza Jahanbakhsh tried to stretch a leg around him to win the ball. The referee pointed to the spot, from which Aubemeyang sent Mat Ryan the wrong way before firing into the corner of the net. It was the Gabonese striker’s 20th league goal of the season and there was plenty of time left for him to increase that tally.

But Arsenal slackened off. Sokratis being booked for a nonsensical dive near half-way in the 15th minute was a symptom of an unpardonable drop in standards by the home team.

Brighton bucked up their ideas. Yves Bissouma, Brighton’s most dangerous midfielder, grew in influence. And as so often, Arsenal’s defence looked vulnerable under pressure while their midfield failed to offer adequate protection.

At right-back Stephan Lichtsteiner, a 35-year-old making his first league start since February owing to the suspension of Ainsley Maitland-Niles, had trouble keeping up with Solly March. What is more, goalkeeper Bernd Leno spawned jitters with erratic distribution, most alarmingly in the 26th minute when he kicked the ball straight to Jahanbakhsh at the edge of the box. In the ensuing pandemonium Shkodran Mustafi did well to block a shot by Murray before March clipped a cross back to the striker to try again from eight yards. Leno reacted sharply to stop his downward header.

This Arsenal seldom control matches. But at least they carry a threat at the Emirates and, sure enough, they created chances to extend their lead. Ryan had to parry a stopping header from Mustafi following a corner in the 35th minute. Moments later they goalkeeper had to fling himself to his right to claw away low shot by Aubemeyang after a typically well judged cross from the right by Mesut Özil. And just before the conclusion of a damningly low-key first half Mkhitaryan raised the tone with a blast from 20 yards. Ryan batted it away before Shane Duffy blocked Lacazette’s effort on the follow-up.

Whatever Emery said at half-time made no difference. Whether that is the manager’s fault is a matter of debate. Either way, his players continued to look disjointed and brittle. And the way they allowed Brighton back into the game was downright ridiculous, Xhaka slapping March on the shoulder as the attacker flew past him in the box. Murray sidefooted the penalty into the net. Brighton had scored for the first time in five away matches.

Arsenal then found urgency, at last, but could not locate the net. Brighton defended like tigers and, on one of the few occasions when Arsenal found a way past them, Aubemayang’s predatory instincts abandoned him as he sent a scissor-kick wide from eight yards.

Emery made a triple substitution as he pursued victory. His team, meanwhile, seemed to be doing their best to throw away even the draw. Leno, at least, did well to save a header by Florin Andone before Gross’s late miss.