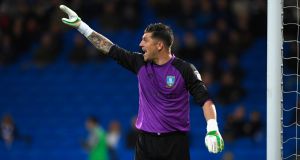 “Think I’m lucky I ride the challenge,” Westwood tweeted. “Would hate to think what might have happened. Pls god it’s just bruising and no ligament damage.”

Keiren Westwood believes he is lucky not to have been more seriously injured in a challenge by Burton’s Marvin Sordell on Saturday, but the Sheffield Wednesday player remains a significant doubt for the Republic of Ireland’s forthcoming World Cup qualifiers

Carlos Carvalhal, Westwood’s manager at Sheffield Wednesday, did not rule him out over the weekend but suggested that he would, at the very least, need to sit out the next few days of training.

Martin O’Neill’s players are due to assemble in Dublin on Monday before training in the late afternoon at Abbotstown and while it is not yet clear how many of the 39 named in the preliminary squad will arrive tomorrow, Westwood seems unlikely to be the only absentee.

Jon Walters and Jeff Hendrick both missed Burnley’s trip to Wembley yesterday but neither they, nor James McCarthy, who played no part in Everton’s defeat at Chelsea, have been ruled out at this stage. Walters seems to be the most doubtful after picking up a fairly serious ankle injury last week but even he seems set to travel over before any decision is made on his possible participation against Georgia or Serbia.

Westwood will be in much the same boat, it seems, after Sordell’s heavy challenge in Saturday’s Championship game. No action was taken against the striker by the referee but Carvalhal said afterwards that he believed he should have been shown a straight red. As it was, the 32 year-old goalkeeper had to receive treatment on the pitch for several minutes after which he tried to continue before it became apparent he was unable to and he was replaced in the 34th minute.

“Think I’m lucky I ride the challenge,” he said later in a tweet that included a picture of his heavily bruised knee. “Would hate to think what might have happened. Pls god it’s just bruising and no ligament damage.”

Westwood was still due to have tests to ascertain the extent of the damage at that stage but it should be clear by Monday afternoon just what part he might hope to play over the next 10 days or so.

O’Neill’s concern will be eased given that Darren Randolph and Rob Elliot both played for their clubs over the weekend and both kept clean sheets.

Among the other positives for the manager to take from the weekend were Robbie Brady’s late assist for Chris Wood in the Tottenham game, Ciaran Clark’s goal for Newcastle against West Ham and the part played by Shane Duffy in Brighton’s clean sheet at Watford.