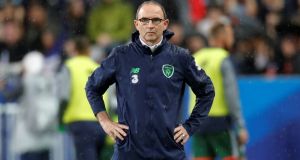 Martin O’Neill admitted that the gulf between the two sides was readily apparent in the Stade de France where Ireland struggled against a French side that played like a side whose players believe that they are World Cup contenders.

“I thought we were naturally second best against a world-class team,” said the northerner whose side lost 2-0 in the French capital. “That was possibly to be expected. I think it was a really, really tough game for us. That was also to be expected. But I am pleased we have taken this fixture on.

“If you are trying to aspire to something, the sort of quality the French possess … we are a great distance off that but I think the players can learn, look at the performance again at our leisure in the next 24 or 48 hours and pick out the things we can improve on.

“We defended very strongly but conceded two bad goals. Our use of the ball can improve. But if you think a young League of Ireland player comes on in the game, that was big experience for him and for Derrick Williams and for a number of the players wearing Irish shirts for first time. It was a great lesson for us tonight in terms of what we are trying to achieve.

“I think they’re very strong,” he said of hosts who controlled the game virtually from start to finish. “Individually they’ve got a lot of talent; I think they’re one of the favourites for the World Cup. I don’t want to put pressure on the coach, far from it, but they are an excellent side. I think they have improved on two years ago and are better equipped than perhaps they were back then.”

The French were well worth their win but, as O’Neill suggested, Ireland did not defend either of the goals they conceded well and Colin Doyle dealt poorly with the second, a shot from Nabil Fekir that the goalkeeper looked set to parry comfortably enough.

“I thought Doyle in the second half showed a bit of mettle and character to come out and make a really good save after the goal conceded towards the end of the first half,” said O’Neill of the Bradford City goalkeeper, however.

Didier Deschamps was in relaxed form, meanwhile, as he reflected on what had been a comfortable win for his side, one that will restore confidence after a couple of disappointing performances back in March.

“We had good control of the game,” said the French coach. “We let them run a lot, we scored at the end of the first half and we had a lot of movement in the team so that is all good.

“It was complicated when there is such heavy rain; the ball doesn’t roll the way it should, we saw that with the last counter attack, it was hard for us but it was hard for Ireland as well.”

1 Gary Neville in Qatar an exercise in semi-journalism
2 Six Nations: Ireland are contenders but England still the team to beat
3 Owen Doyle: Creeping professionalism of schools rugby a threat to the game
4 The world spins but it’s soon back to Dublin and Kerry
5 Weekend hurling previews: Tipperary aiming to make an opening statement
Real news has value SUBSCRIBE
Crossword Get access to over 6,000 interactive crosswords