Jordan Henderson: ‘We have to be brave’ in Kiev 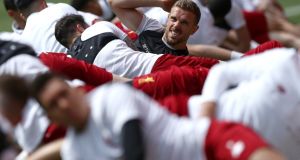 Liverpool’s Jordan Henderson warms up with team-mates during a training session at Anfield on Monday ahead of Saturday’s Champions League final against Real Madrid in Kiev. Photograph: Jan Kruger/Getty Images

The mood in the Liverpool team hotel was understandably bleak following defeat by Sevilla in the 2016 Europa League final. Players were allowed to drink but there was little conversation flowing that night in Basel until Jürgen Klopp, at the end of his first season as manager, addressed the squad. “It felt shit three hours ago and it still feels shit,” he began. “But we will be back.” It was the defiance behind those words that made the greatest impression on Jordan Henderson.

Klopp launched into a hoarse version of We Are Liverpool once his rallying call was over. It was a stoic effort considering he had just suffered a fifth consecutive cup final defeat but, to Liverpool’s captain, there was a confidence born in Klopp that night that has underpinned progress to Saturday’s Champions League final against Real Madrid. It is the belief that next time, this time, Liverpool will be ready.

“It was the worst feeling ever,” recalls Henderson, an unused substitute against Sevilla having damaged knee ligaments in the quarter-final at Borussia Dortmund. “I remember after the game the manager was obviously down but when we got back to the hotel he had something different about him. He was proud of the players who got to the final and how much we had improved since he came in. He had, I felt, a vision that in the future we would get to another final.

“He was obviously disappointed with the result, but he looked at the bigger picture and the future, and he felt it could be a big moment in our careers if we learned from the experience. He had something about him that made you feel it was the start of something, that there was something he could take forward and use to get the team to another final. And, if we got to another final, we’d be ready.”

There is another thread through Liverpool’s Champions League campaign that can be traced back to Basel. After that 3-1 defeat Klopp claimed his team had “lost faith in our style of play”. Throughout the thrilling advance on Kiev it has become the manager’s mantra that Liverpool must be brave, and it was the quality he identified as key to victory over Manchester City and Roma. The message will no doubt be repeated before Real Madrid, but it is already embedded in his players.

“Real Madrid are a team of winners,” Henderson says. “Individually they have world-class players all over the pitch. They find a way to win and that’s what the best teams do. That’s what we have to do at the weekend, just keep doing what we have been doing through the campaign. We’ve been brilliant. On the day we have to be brave and play like we know we can. If we do that, we can hurt them.”

Henderson will become the fifth man in Liverpool’s history to lift the European Cup should Klopp’s side halt the holders’ quest for a third consecutive Champions League. The 27-year-old may be understated compared with Emlyn Hughes, Phil Thompson, Graeme Souness and Steven Gerrard, but he shares the single-mindedness that enabled his predecessors to reach the summit of European football.

As he says: “Beating City was an amazing feeling but the most important thing is that we haven’t won anything yet and that is what you are judged on. In 20, 30 years’ time people will look back and say Liverpool won the European Cup in 2018, not that they qualified for the semi or final. The biggest thing for us is to go that step further and win.

“You never know what will happen in football. I hope there are a lot more opportunities in the next few years because I feel we are good enough, we have a world-class manager and we are going in the right direction. But this is our first final in a while and getting over that first hurdle as a team and winning the Champions League would be a massive step. The belief we would get can really put us in a good position over the next couple of years for the Premier League, Champions League, FA Cup.”

Henderson has been in close contact with the family of Sean Cox since the 53-year-old was attacked by rival fans before the semi-final first leg with Roma. Cox remains in hospital almost a month after the incident with a brain injury and the midfielder, who held aloft a banner paying tribute to the Irishman in Rome, says the whole squad has been affected.

“When you hear that someone is seriously hurt and in a coma it does hurt us as players because he just wanted to watch and support us,” Henderson says. “It is important for us to support him and his family. As captain you have a responsibility to get in touch. I felt in the second leg the players had him in the back of their minds and we used that to perform for him and his family.”