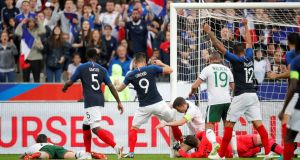 Despite the defeat, this was far from Ireland’s worst ever night at the Stade de France but they have had better. Outplayed from beginning to end by a vastly superior French side there was a little to cheer about for the few hundred fans who braved the torrential rain to support visitors who looked very much like extras at somebody else’s show.

The polite expectation on these occasions is, of course, that the opposition will come and gently test their hosts before eventually rolling over and so you might say that Martin O’Neill’s men earned the FAI its match fee rather impressively.

When they conceded twice in the space of four minutes towards the end of the first half, there seemed every chance that the usual script might be abandoned and Didier Deschamps’ side would set about dispelling some of the doubts expressed about them in recent months by doling out a bit of a hiding.

An Irish side in which Declan Rice anchored a five-man midfield and Derrick Williams started his first full international game at left back held together well enough in the circumstances but the fact that the scale of the defeat wasn’t a good deal greater by the end was largely down to the general lack of urgency shown by their hosts.

Deschamps had talked about the need for his players to face a side that played direct football while Blaise Matuidi had hoped the game would provide an opportunity to perfect their set pieces; check and check. The Irish hoofed balls in the general direction of Shane Long whenever a chance came their way and for the most part a French defence raised to play a better brand of football, showed their coach they could cope with a lone striker prepared to put in a shift and throw himself about a bit.

The locals, meanwhile, were presented with a steady trickle of frees and corners due to the amount of pressure Ireland were put under from play and – having played to Shane Duffy’s strengths with his first couple of lofted attempts – Nabil Fekir’s efforts started to improve. It was his corner, five minutes before the end of the first half, which Olivier Giroud headed goalwards, then forced home at the third attempt through the sheer force of his will.

That was no more than the French deserved given their share of the possession and near monopoly of the attacking play but their second – four minutes later – was an unnecessarily generous gift with Kylian Mbappé feeding Fekir inside the area and the Lyon forward stepping inside for a shot that Doyle look set to parry handily enough. But instead of pushing it to safety the 32-year-old seemed to misjudge the flight of the ball ever so slightly and it flew off his gloves and high into the air before landing behind him and bouncing, aided by the spin on it, over the line.

At least it had the desired effect on the mood of a crowd who a little while earlier had seemed disappointed when a slightly prolonged pursuit of a lone pitch invader by two security men had finally been brought to an end, but it was disappointing for Doyle who made some very decent saves as well over the course of the night.

The French, in any case, returned for the second half knowing the game was won and any pressure was off. Their approach reflected both facts and the flamboyance of Kylian Mbappé’s attacking play was the most enjoyable aspect of the early second half. The 19-year-old thought he had a goal at one point but it was ruled out for offside and he almost made amends when he took Seamus Coleman for a bit of a run before cutting back inside for what looked likely to be a shot. Instead, he laid it perfectly into the path of Giroud but the Chelsea striker’s first touch strongly suggested he hadn’t expected to be teed up like that.

For Ireland, Williams did well early on, at least until he was nutmegged by Djibril Sidibé. James McClean dug him out on that occasion by providing the necessary cover but in the process left the space required for Corentin Tolisso to have a shot that clattered the outside of the right-hand post. Still, the Blackburn defender showed a composure and willingness to push forward that suggested he might do better as he beds down over the next year or two.

In midfield Ireland generally struggled and Rice never really had the opportunity to show the sort of enterprise that had caught everyone’s eye in Turkey back in March even after he was relieved of some of his defensive responsibility with the arrival of Meyler. Jon Walters made little or no impact on the attacking side of things, meanwhile, and like McClean spent a good chuck of his night defending against out wide.

The Derryman almost caused an international incident with a challenge on Blaise Matuidi that the more diplomatic of the locals might have described as “unnecessary” but he finished the night playing as a striker where, like Long before him, he was largely a long distance onlooker.

But, right at the death Shaun Wiliams – who like Graham Burke got on to make his debut – might well have scored when he was put clean through on the French goalkeeper but Steve Mandanda did well to get off his line and block at the midfielder’s feet. That, it seemed, would be that but from the Irish corner the home side broke with Ousmane Dembélé and Antoine Griezmann going two-on-two with Matt Doherty and Rice.

It didn’t look promising but the Irish pair were ultimately saved by a puddle that stopped Dembélé’s ball dead. The two French players looked dejected but overall they had done more than enough to ensure that spirits had been lifted not dampened with two more games to go before they head to Russia.

1 Gerry Thornley: Saracens very late to apologise for repeated cheating
2 As the UK tightens gambling laws Ireland still lags way behind
3 Champions Cup final: How to get there, how to get tickets and more
4 Felix Jones expects De Allende and Snyman to boost Munster
5 Ken Early: Solskjaer’s short-term gambles proving very costly for United
Real news has value SUBSCRIBE
Crossword Get access to over 6,000 interactive crosswords